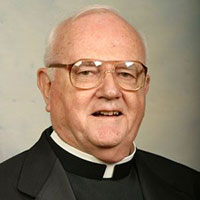 On 6 September 2016, Fr. George MCLEAN, an Oblate of international renown in the fields of philosophy and intercultural dialogue died at the Immaculate Heart of Mary Residence in Tewksbury, Massachusetts.

Fr. McLean professed his first vows as a Missionary Oblate in 1949, and did his theological studies in Rome. He was ordained to the priesthood in Roviano, Italy, in 1955. 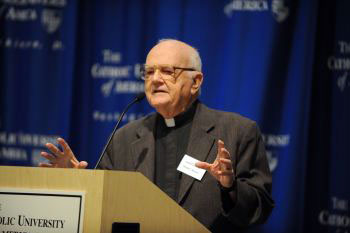 From 1956 until 1993, Fr. McLean was a professor at the Oblate College and the Catholic University of America, both in Washington, D.C. In 1983, he founded and was Director of the Council for Research in Values and

Philosophy in Washington, D.C. As a multilingual speaker, his four languages were advantageous, as the council is comprised of prominent philosophers and social scientists from many countries. He coordinated seminars and workshops that sought to capture the gifts and values that Fr. McLean saw as inherent in the different cultures,

traditions and faiths across the world and to encourage a multidisciplinary, collaborative and analytical approach to the discovery of how their unique threads of wisdom could be woven into a tapestry that would help us to relearn how to be human in global times.

He was an unofficial collaborator of Karol Wojtyla, the future Pope St. John Paul II, having met him before he was elected pope, and shared his passion for the evangelization of culture. In the missionary spirit that was rekindled and directed by the Second Vatican Council, Fr. McLean taught that the Spirit of God was alive in every culture, and he spent his life helping people identify and engage that Spirit and announce it in a way that they could understand and share.

Tempier: the youthful face of a faithful friend
Oblates in a dangerous area