October 18, 2017, marked the beginning of the 60th anniversary celebrations of the founding of Iona College. Sixty years ago, the first Oblate missionaries arrived at Lindum. They made a firm commitment to enhancing the educational opportunities of local families in a Catholic faith context.

One of the very first students at Iona became an Oblate of Mary Immaculate: Fr. William OUSLEY. The local Catholic newspaper, “The Catholic Leader”, published this article about Fr. Bill and Iona: 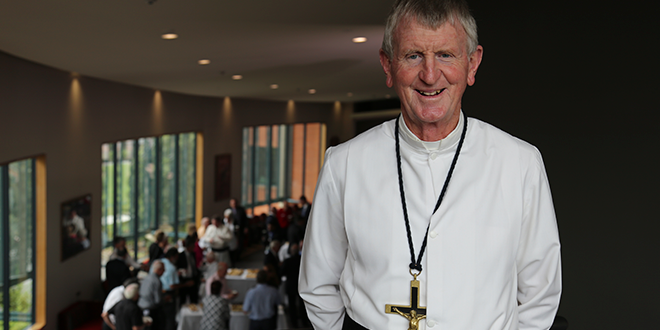 Bill Ousley was the first young student to step through the gates of Iona College 60 years ago. He was schooled by priests of the Missionary Oblates of Mary Immaculate (OMI) from Year 6 to graduation, and it was their inspiration that led him to become a priest himself.

“Because they were a community. I always noticed that,” Fr Ousley said, returning to Iona College to join in celebrations. “With the encouragement of the retreat master I wrote to the novice master and joined (the Oblates) just after school.”

He was back there on October 18 for the college’s 60th anniversary.

Fr Ousley grew up across the road from Iona College, literally, in North Road, Lindum. “It was a brand new experience for all of us coming here – fifty-six students in Grades 6 and 7,” he recalled. “It was a big farmhouse. We used to have morning assembly at the foot of the stairs and then troop down to the classrooms.”

Iona College was the first school opened in Australia by the Oblates, a missionary order founded in France in 1816 by Eugene de Mazenod, who was canonised a saint in 1995. St Eugene de Mazenod’s calling to other Oblates was to minister to the marginalised and abandoned, and for all to strive to “know what you are in the eyes of God”. 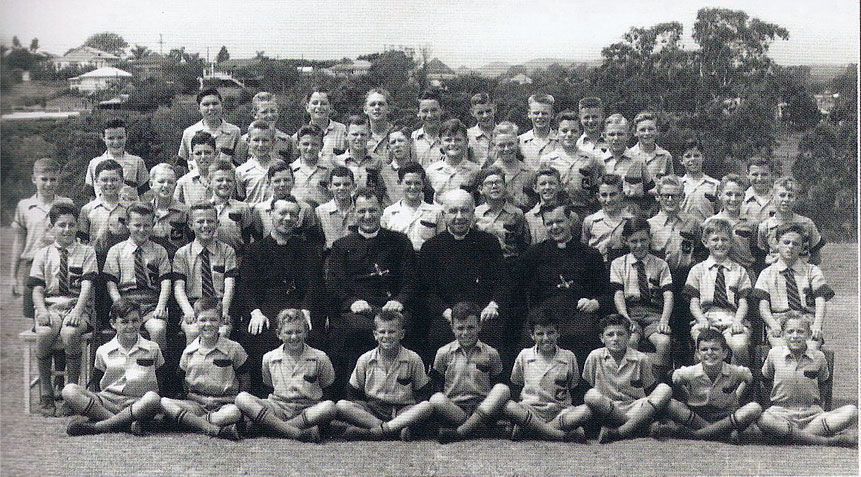 The name Iona comes from a small island close to the Scottish mainland off the south-west coast of Mull in the Inner Hebrides. It is about six kilometres long and about two kilometres wide. Some have called it, “The cradle of Christianity” in Scotland. The original Iona was a famous seat of learning established in the year 563 AD by St Columba off the coast of Argyll, Scotland.

Brisbane’s Iona College was founded by rector Fathers Tim LONG and Denis McCARTHY on October 1, 1957. At the “turning of the sod” ceremony on December 1, 1957, Fr Long noted that the first Iona was the birthplace of a tradition. The 1957 ceremony was a highly symbolic occasion signifying the “rebirth of a tradition” of learning. 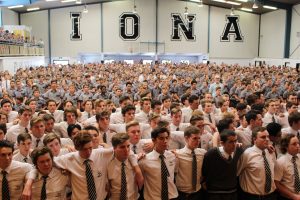 “As the years go by, let us never forget our humble beginnings, the unconditional love and generosity of so many who believed in the vision and worked to make this school a reality,” Fr Long said.  “For those who paved the path have also moved on, leaving only the path, the path to pursue more from life, may God continue to bless Iona College. May we continue to tell our story as the years go on, as more and more.”

Looking around the current Iona College campus he said he was struck by just how far the campus had come. “When I left here in 1964 there were 12 missionary Oblates and one lay staff member,” he said. “It’s got very big. It’s like a university.”

As an Oblate priest, Fr Ousley worked as a missionary in New Zealand, taught for nearly 20 years, including a return to Iona College, and now helps in parish ministry in Victoria. (By Mark Bowling, in THE CATHOLIC LEADER, October 27, 2107)