“I allowed myself to be evangelized by the poor”

It was not so long ago that Fr. Jean Pierre Faye, OMI (from Senegal) joined the OMI mission in Kenya.  He recently had his first experience with the Masai people in our Kisaju Parish (Kajiado County, Kenya).

The first Sunday after Pentecost, the Most Holy Trinity, I had an opportunity to celebrate the Holy Eucharist in Masai land.  After the first Mass of the day in Kisaju Parish, presided by Fr Gideon Mberia, OMI (Parish Priest), we went to a traditional Masai community.  The place is a bit far from the Parish centre and we drove for many miles.  I was excited by the scenery and various wild animals such as zebra and ostrich, which I’d never seen with my own eyes before that day. 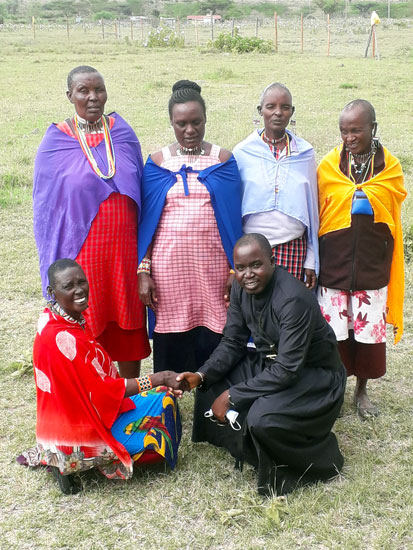 Fr Gideon dropped me at a small community (about fifteen members), dressed in their traditional clothes.  Being my first time to meet the Masai face-to-face, I was very impressed!  I really admired and felt uplifted by their active and energetic participation during the liturgy.  Their offertories were mostly fresh milk. I thought to myself that it would have been the shepherd’s gift to infant Jesus in Bethlehem.

I had only known these people through West African TV documentaries.  But there are similar ethnic people in my country called the Alpular and, in Central Africa, a nomadic people (Mbororo) especially in the north of Cameroun.  I never thought I would be in their midst one day and offer the Holy Sacrifice.  Being in their midst was like what the former Senegalese president (Leopold Sedar Senghor) calls in his literature « Le rendez vous du donner et de recevoir » (“the appointed moment of giving and receiving”).

Even as I offered them the Holy Mass, I learned from them humility and the sense of welcoming… Their faces were shining in joy; it was as if to express the mystery of the Holy Trinity; One God in three persons which we celebrated that day.  Their joy challenged me a lot.  It was an unforgettable experience for me.

When I reflected further on my experience, I remembered the following texts found on our Constitutions and Rules:

# “We will let our lives be enriched by the poor and the marginalized as we work with them, for they can make us hear in new ways the Gospel we proclaim. We must always be sensitive to the mentality of the people, drawing on the riches of their culture and religious traditions”.
(R8a, OMI CCRR)

# “…we can learn from the poor, especially making our own their patience, hope and solidarity.
(C20, OMI CCRR)

Invitation to Prayer
Launching a novena in memory of Bishop Pedro Shaw, OMI