The Holy Father, Pope Francis, has accepted the resignation of His Excellency Mons. Lucio ALFERT, O.M.I. from the pastoral government of the Apostolic Vicariate of Pilcomayo and, at the same time, has appointed Father Miguel FRITZ, O.M.I. as Apostolic Administrator sede vacante et ad nutum Sanctae Sedis (i.e. at the discretion of the Holy See) of the same Vicariate. 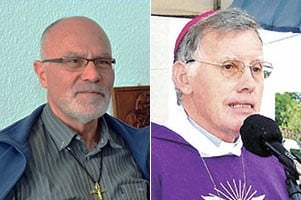 The news was published on Friday 18 November 2022, at 12:00 Rome time, in the edition of L’Osservatore Romano (Bulletin of the Holy See).

From the headquarters of the Vicariate, the announcement was made by Bishop Alfert in the presence of Fr. Fritz and some representatives of the clergy, religious and faithful. Afterwards, in the Cathedral of Mariscal Estigarribia, the Eucharistic celebration for the installation of the Apostolic Administrator took place.

Fr. Miguel Fritz has served in the OMI General Administration as the General Councilor for Latin America from 2010 to 2016.

The Apostolic Nuncio conveyed to Mons. Lucio Alfert the gratitude of the Holy Father and also his personal thanks for his long and generous service in this Vicariate and, at the same time, hopes that Father Miguel Fritz will be able to carry out his pastoral work as Apostolic Administrator with success.

– Studies in philosophy and theology: Gutenberg University, Mainz – Germany (Diploma in Theology and Bachelor of Arts in Anthropology)

– 2016-2022: Vicar Delegate of the Apostolic Vicariate of Plicomayo and Parish Priest of the Parish San Leonardo, Fischat – Paraguay.