Remembering Pope Benedict at the time of his funeral

Pope Benedict has passed away. He will be remembered in numerous ways. In the history there will remain, of course, all he did and suffered as the supreme pontiff. He must also be considered for being one of the leading scholars in the time after Vatican II. “Introduction into Christianity” was a book that impacted on me personally when I was a theology student. And also, Pope Benedict XVI should stay in our heart for his kind yet strong leadership.

What about his relationship with the Oblates? Later, some of our historians will be able to evaluate in detail how it has been. For now, let me share with you just a few rather personal anecdotes.

During my time as Superior General, I met the then Cardinal Ratzinger only once; it was at the Dicastery of the Doctrine of Faith. I knew that my predecessor Fr Marcello Zago had visited him several times as well. The subject of conversation was always issues of doctrine that involved Oblates. When it was my turn to see Cardinal Joseph Ratzinger I recall that I was very well received in his private office. Then at the formal meeting with him and his staff we discussed our issue, and the conversation became quite controversial. After the meeting I wrote a memory of what I remembered of the meeting and proposed a solution. After some days my proposal was accepted by Ratzinger. I felt surprised and happy and will always keep in mind the spirit of dialogue I had experienced when dealing with the Prefect. 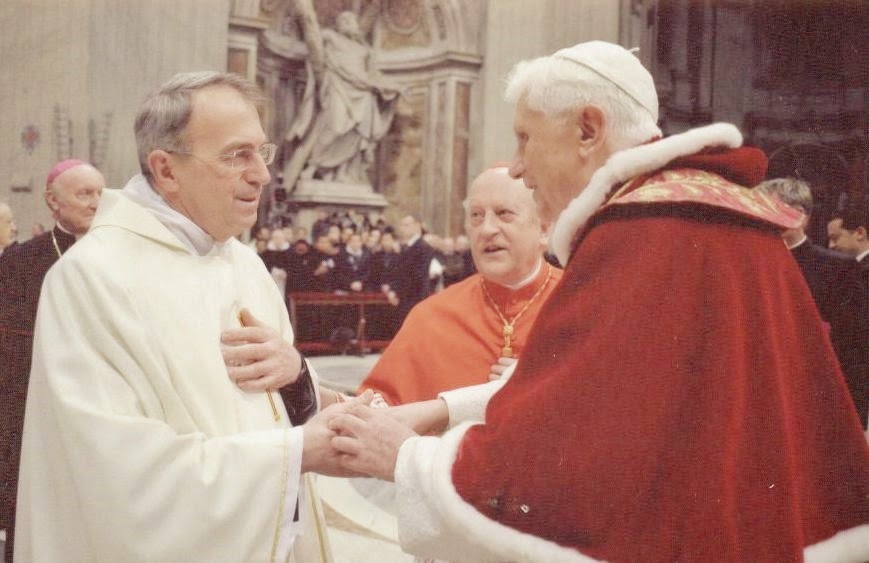 After his election as pope and after our next general chapter, we Oblates were received by him just at a general audience if my memory is correct. He had diminished the private or group audiences because of the workload of so many things. Later on, a group of Superiors General, male and female, were received by Pope Benedict XVI to discuss consecrated life, and I was one of the group. There we experienced a new style of communicating with our Holy Father. We just sat around a large table, some cardinals being also present, and talked openly about the questions we had been asked to prepare. The meeting lasted about one hour. It was a wonderful instance of dialogue that put an end to several somehow more harsh years before, that had to do with the officers of the Dicastery for Consecrated Life.

The third meeting of significance for me happened after a mass in St Peter’s square. Fr Louis Lougen and I were allowed to present ourselves to the Pope as outgoing and newly elected Superior of the Oblates of Mary Immaculate respectively. It was a short encounter. Benedict said a few words, asked us questions about the Oblates and our persons and surprised us for his knowledge of background.

A thing we all perhaps not have been fully aware of was Benedict’s decisiveness to tackle the issue of sexual abuse by ministers of the church. Pope John Paul II had already entrusted to him these cases. Later, I read that Cardinal Ratzinger was determined to shed full light on the case of the Founder of the Legionaries of Christ at a time when this priest was still highly praised by many. This new way of proceeding had a huge impact on the Church and the Oblates when we had to struggle with abuse issues.

Behind all of this we will discover in Benedict a great love for the Church, and all her faithful. Yes, he never ceased to be the famous “Professor Dr. Dr.” of his German days. But above all he proved to be a great and holy disciple of Christ, recognizable as such by his kindness, joy and humility. After some years he was not afraid to return his pontifical responsibility for the Spouse of Christ to her husband; he felt he had become too diminished to fulfill his mission. Benedict loved the Church. And in this, he is of the same kind as Saint Eugene of Mazenod.