A black fox for the Pope 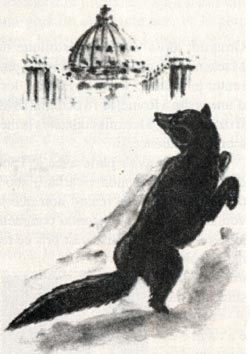 At the beginning of the twentieth century, the survival of the Oblate missions on the banks of the Mackenzie depended in great part on the skills and the dedication of the brothers, justly known as “Unknown Apostles.” Providing food for hundreds of persons, religious men and women and their students in boarding schools, required very skillful hunters and fishermen.

Outstanding hunters
Of the many brothers who were famous sharpshooters, Brother Olivier Carour comes at the head of the list. This short Breton, stocky and solidly built, had an original way of striking any caribou or wolf that came within his line of vision. Since he was unable to close only one eye, he would slide his woolen cap over the left eye, aim a muzzeleloading rifle that was bigger than himself, and, at the right moment, let go the shot. Nine times out of ten he would hit the target.

Another brother who was just as skilled at fox-hunting was Brother Olivier Leroux. This other brother from Finistère had the honor and joy of gratifying Pope Leo XIII with the gift of the richest known fur from the arctic regions: the black fox. Bishop Emile Grouard, then Vicar Apostolic of Mackenzie, took upon himself personally to present this precious parcel to the Pontiff , on the occasion of his visit to Rome on October 18, 1898. This is how he related the memorable audience to his missionaries:

“After having spoken with the Pope about the situation in my vicariate, I brought up the matter of my black fox that I wanted to present to him. I mentioned how Brother Olivier Leroux had trapped this fox. I added a word about the broken negotiations with a Protestant Doctor, who was set on purchasing this fur. Doctor MacKay generously gave up the negotiations saying: ‘Well, seeing it’s for the Pope, tell him that I am giving up my rights in his favor.’ Leo XIII was visibly touched: ‘Tell this good doctor that the Pope blesses him, him and his whole family, and this blessing will bring him happiness.’ I then presented the beautiful fur to the Holy Father, which pleased him very much. ‘I’ll keep it for myself’ said he, while stroking it.

“My priest companion explained how difficult it was to capture this animal, and the manner of setting the traps. All the while he was mimicking the fox: smelling the bait, becoming suspicious, approaching, encircling, pawing the snow, etc. The kindhearted Pope followed all these gestures with his eyes, laughing at the details, reproducing in his features what must have been the suspicious feelings of master fox. It was truly delightful, a pleasure to see the Holy Father putting aside for a moment the cares and serious matters that besiege him constantly… ‘Tell your missionaries that the old Pope blesses them’, he repeated to close off.

“On leaving the Sovereign Pontiff, touched and moved as I was, I had only one prayer in my heart and on my lips: ‘May Our Lord receive me as well as did his Vicar… I ask for nothing more’.”

The name shall be “Grouard”
The Inspector of Schools dumbfounded