Should He Have Blessed Lucifer?

Saint Eugene de Mazenod, as bishop, found in Marseille a most appropriate location for exercising his apostolic zeal. This city, which was important due to its geographic location and its busy port, had become the second city of France, having a population of 260,000 inhabitants, according to the 1861 census. Most of all, the increasing number of immigrants brought about many religious and social problems, such as the recruiting of clergy, education in the Faith, employment, housing, poverty, etc. In such circumstances, the bishop of this large diocese showed a constant interest in the general development of the city. Without getting involved in the economic, industrial, agricultural, or financial domains, he endeavored to encourage the various enterprises of his diocesan flock. Everything became for him an occasion to enlighten the minds and direct the hearts towards the “realities from above”: pastoral letters, blessings of churches, hospitals, ships, monuments, banks, etc.

“Bishop, please bless”
On January 8, 1848, he was invited to the inaugural of a railroad line uniting Marseille and Avignon. A long tunnel of four and a half kilometers had been dug through the flank of the Nerthe, a mountain of 279 meters in hight, north of Marseilles. This cleared the way from Paris to Marseille. The event was of capital importance for that time. The promoters wanted the assurance of a blessing from the bishop. In the new Saint Charles railroad station, a large platform had been erected for an altar surmounted by a cross. On the brand new rails in the adjacent yard the locomotives were lined up for the episcopal blessing. 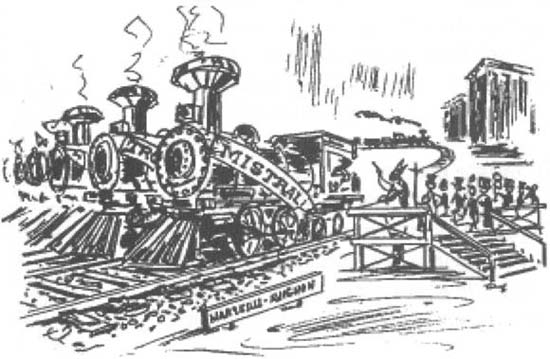 The president of the city council presented the honored guests, and right after, it was Bishop de Mazenod’s turn to speak. “Providence” he said “not satisfied with the addition of new advantages to the material lives of people, wants to bring them closer, to unite them in the moral order. By multiplying the relationships of one to the other we hasten the move towards the mysterious unity of all the children belonging to the human family under the same God and the same Faith. May those who travel on this road be protected by the Angel of the Lord who always accompanies them and brings them back to the bosom of their families, happy to see them return.”

Then the Bishop intoned the Veni Creator, blessed the water and read the prayer for the blessing of locomotives, adapting for the circumstances the prayers intended for the Itinerary of Clerics. After this he descended, in cope and miter, towards the rails on which ten new locomotives, decorated with flags and foliage, must majestically pass.

Embarrassing Dilemma
This ceremony, however, provoked a particularly thorny incident that could have left the unfortunate bishop of Marseille in a very embarrassing situation. Among the ten resplendent new locomotives that displayed poetic names like “Mistral” or “Trombe” one carried the name of “Lucifer”, the very name of the devil! How could one bless an engine rigged out in such an name! Fortunately, a solution was found. Shortly before the filing by, the arrogant locomotive was driven to a side track at the end of the station. Thus Lucifer did not have to submit to the splashes of Holy Water which the prelate abundantly sprinkled the other nine as they stopped one after the other in front of the altar. Once the ceremony was over, as reported by a local historian of the time, in an embellished style, “the ten glowing machines joined for their run and soon disappeared in the distance, leaving behind them a long tuft of smoke.

Brother Biggan Discovers a Secret Cache
His gun… for an Oblate cross!