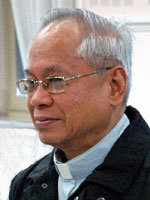 Let us all marvel at God’s works

I grew up with the Oblates as a young boy, serving Masses of the first Oblate missionaries in the Philippines, in a place called Marbel which is now a province in South Cotobato. But in those days in the 1940’s, that town was a part of an undivided Cotobato Province. Then it was divided into five and the Oblates worked in the northern part of that province. It is a poorer area where our brothers and sisters of Islam are also living. I grew up appreciating the Oblate Fathers who were American missionaries and when I finished high school under the Marist Brothers, I told the Oblates that I would like to become an Oblate. I was accepted and I went to the Juniorate. But then after the Juniorate and Philosophate in a Jesuit seminary, I had my novitiate in Mission, Texas, and then Theology at the Oblate College in Washington D.C. After being ordained a priest in 1964 I served for 12 years in the archdiocese of Cotobato which was then under an Oblate archbishop, Archbishop Mongeau. My first twelve years as a priest were spent mostly teaching at the university and also partly in formation work in the diocesan seminary. Yet it was the Oblate formation I had that helped me to face the challenges which came my way. 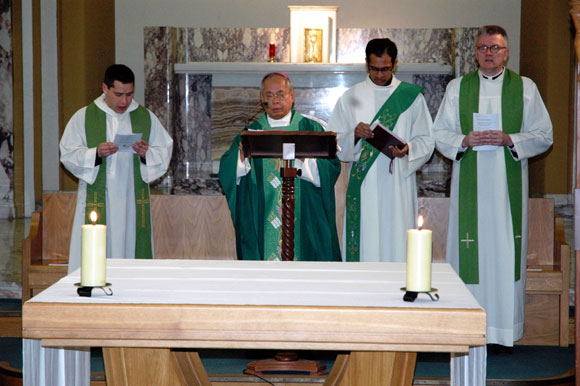 I think it was their missionary zeal. They were Americans and they had to go down, in terms of culture, to the Filipino level. They worked in the barrios in the villages and I think it was their simplicity and zeal for the mission which attracted me. They did not look for better things. They were very comfortable with whatever simple things the Filipino farmers could give them. That was what attracted me most.

I always tried to be that, to be like the missionaries. Before becoming a bishop, I was serving in an institution. Yet the idea of sharing my life with others and being with poor people, especially the Muslims and the indigenous people, always became my orientation. I believe it was of course a result of my being with the Oblates plus my own Oblate formation in the seminaries.

First in Kidapawan, my first diocese as a bishop, there were already a lot of conflicts because of the martial law. I was the bishop of a place where the Church was somehow persecuted as we were suspected of being subversive and of being sympathizers of the communists. This was of course not true but nonetheless, the suspicion led to many killings, tortures, and disappearances of our lay leaders, including the death of an Italian missionary. But then in Cotobato the situation is different. Of course the archdiocese of Cotobato has been going through troublesome periods, conflicts between Moro Islamic rebels and the government. It is a political struggle and not a religious struggle. But we managed to remain friendly towards the Muslims at the grassroots level. Many of the rebel leaders are graduates of our Catholic schools in the archdiocese and some were students of the Notre Dame University where I was the president. So the situation is sometimes over-publicized because the conflict is only in some parts of the archdiocese of Cotobato and not everywhere. Nonetheless I am concerned because there is still so much of bias and prejudice among Muslims and Christians alike.

I am a shepherd of the archdiocese of Cotobato but my thoughts of course have to go to the whole of Mindanao. The island of Mindanao has 5 archbishops and something like 22 bishops. I have to somehow be one with them in speaking out on certain issues. I cannot speak out for myself and say this is my own opinion, because the media always says that when a cardinal speaks, he speaks for everybody. This is not true but then I too have to be prudent and know the issues very well so that I can speak on behalf of the bishops of Mindanao. My first concern and hope would be peace; peace in our territory in Central Mindanao; peace in the archdiocese of Cotobato. Second, my hope is to see better harmonious relationships among Christians, Muslims and indigenous people through interreligious dialogue. My third hope for the people of Cotobato is to see the economic development of all people irrespective of their faiths. But my most primary concern is to inject the dimension of faith, whether in Christians or in Islam or in indigenous people — to have a common ground for peace and interreligious dialogue on the basis of one’s faith. And I would like to press for that. 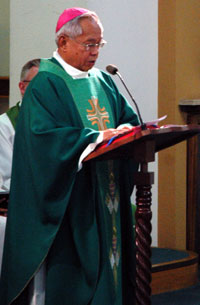 There are many Oblates who have influenced me. The first one to mention would be Archbishop Gerard Mongeau who was a Canadian but who had his theological education in the U.S. A., and became the superior of the first 7 Oblates who came to the Philippines in 1939. He was a very dynamic type of a bishop and priest. He was simple and always had a big smile. The second would be Archbishop Philip Smit. He was my superior in Philosophy. He was my predecessor at Notre Dame University and he was also my immediate predecessor as archbishop. His simplicity, generosity and kindness were very inspiring. The third one would be my superior at Notre Dame University, Fr. Robert Sullivan. Fr. Sullivan was sort of an intellectual. He would not smile very much but when you had a problem he would always be close to you and would act like a real father.

However, the first one who attracted me was a missionary, a parish priest. His name was Fr. Joseph Quin, an American, a very tall man. He was the parish priest of the parish where I served Masses. Till his death he was wearing army boots. I think he was part of the number of Oblates who were in the concentration camps during the World War II in Manila.

And then the professors I had. One was Fr. Jerry Kennedy in Washington and he was a Scripture scholar. He was my confessor and therefore he surely played a part in my spiritual journey by mentoring me. In the novitiate, two people inspired me very much. Fr. Larry Seidel who was my Novice Master. At that time I was 17 years old and was homesick, being far away from the Philippines. He helped me to go through the novitiate. His assistant was the old Oblate Fr. Henry Janvier. He was also a member of the famous “Cavalry of Christ” who rode horses. He was very kind and understanding towards me.

I also would like to say that today the Oblate priests in Cotobato as a group are a very inspiring group because they are very close to poor people and live a very simple life style. They too are very inspiring to me today.

I really cannot understand the marvelous ways God moves in my life. Now I have been elected a cardinal, the second living Oblate cardinal after my good friend and contemporary Cardinal Francis George. Let us all marvel at God’s works in our own lives. I also think we as Oblates need to be role models of consecrated life; in other words, models of a life consecrated to God. Not only the religious, but also all priests and all the baptized Christians themselves are consecrated to God; but we have to be role models of faith. Because of the problems we have in the world today, we need to be models of ‘a hope in the future too, for the people in trouble. We also have to be role models of simplicity and humility. It is by our life style and our own behavior that we can speak louder, more than words.