The Synod on the Eucharist

On October 26, 2005, Oblate Information Service interviewed Bishop Gerald WIESNER, OMI, of the Prince George Diocese in British Columbia, Canada. Bishop Wiesner was one of four Oblate bishops who took part in the recent Synod on the Eucharist, held in Rome. 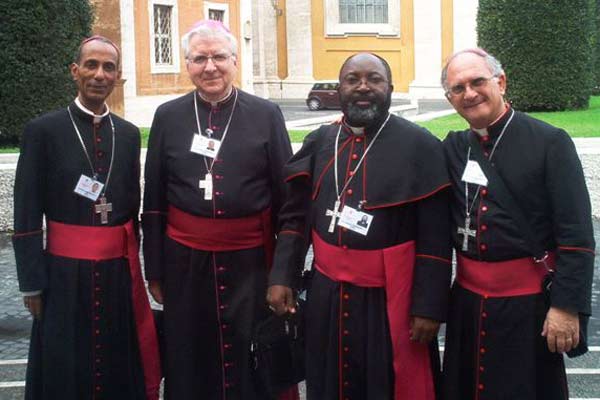 The four Oblate bishops who took part in the recent Synod.

From 1964 to 1972 Bishop Wiesner was a professor of Theology at St. Charles Scholasticate in Battleford, Saskatchewan. During that time he was involved in formation work in the Oblate Community, which he continued when the Oblate Scholasticate moved to Edmonton, Alberta in 1972. From 1972 to 1984 and again from 1991 to 1992 he taught theology at Newman Theological College. In the interim between 1984 and 1990, he served as provincial of St. Mary’s Province. In 1992 he served briefly as Acting President of the college until his appointment as Bishop of the Diocese of Prince George.

I was elected by our Canadian Conference at our plenary session in 2004. Four of us were elected, two from the English sector and two from the French sector.

Yes it was. For two years I was Vice-President, and for two years, the President. It’s a service that someone is called to do. There are benefits that go with it too. There are experiences that I had as president that I am grateful for. I don’t know if I mentioned it to you, but we met the pope here at the Synod. We met him in our small linguistic group. I suppose there were about thirty in the group. I was near the end of the group that met him. The Cardinals had met him and the archbishops. Ahead of me were a bishop from the Caribbean and one from Africa. I came along and I was going to give him my name. But he said to me, “Bishop Wiesner, you are from Canada. You used to visit our office.” It was five years ago that I was president of the conference. Somehow or other, he remembered. It’s extraordinary.

Probably one of the most striking things is that it was a very good experience of collegiality, being together with bishops from across the world. It was an extraordinary experience. And I would say, along with that, a really broad experience of Church. I had been at the Synod of America, and that was a good experience. Like someone said, “We came to Rome to get to know America.” And in many ways, that was true.

But this Synod was much different. This was much, much broader than that. A little example: it was brought up in our small discussion group that something should be done with the Sign of Peace during the Eucharist…that it was too disturbing before Communion…that it’s irreverent…that there’s too much exchange going on. Then a bishop from Sudan speaks up. He says, “Our country has been at war for 14 years. The only time people can experience some peace, some joy, some goodness, is at Mass. And they are a very expressive people. They like to express the joy that they are celebrating here.” You know, you sit and listen to that and you say, “The sign of peace is bigger than it is in Canada.” That’s just a little example, but that broad experience of Church I found most extraordinary. I had had some awareness of this, but when you hear the concrete, practical things, it makes a big difference.

During the Synod, I wrote down just the headings of what the different interventions were about. It’s interesting that when you go through the different countries and what different people expressed, a lot of things are the same. But there were things that emerged that really make you stop and think. It’s not exactly our own experience, but you can understand where they were coming from as they expressed their experience.

It will be interesting to see what the Holy Father does with the propositions. I’m not so sure we came up with anything extraordinarily new at the Synod. It was a strong updating and deepening of the Eucharistic life of the Church. That evidently was one of the main purposes of it and I think that was achieved. I’ll go home with a renewed and deepened experience of the Eucharist…something I would like to share with the people of the diocese.

The first thing that strikes me, as I said, is the collegiality. For example, I was in an English group and I think there were 25 people in the group who could vote on things. We were five Caucasians in this English-speaking group. That says something about Church. I sat up and looked around the room when I realized that. And there were some other rites there too, Eastern rites. That’s for me a highlight, and also the deepening of the Eucharistic life of the Church. Those are the two main things that I would take away.

Well, there were a few issues that I think we could have advanced somewhat and did not. One of them was the question of not being able to provide the Eucharist for all the people—in other words, a shortage of ordained ministers. That came up in many different situations and circumstances. And I wish we had had a little more openness. It’s not that we would have solved things there, but maybe we could have at least questioned some of the things we are insisting on. In response to this question, there was a very strong affirmation…almost an essential connection made between priesthood and celibacy. So to look at the possibility that “viri probati” – men who have proven themselves; catechists who have proven themselves or are exercising a strong leadership role, really caring for people in some of the remote areas where we have difficulty finding a priest to come and celebrate the Eucharist — the possibility of looking into something like that did not make any inroads. I would have thought, would have hoped, that we could have said something like this: “It could be discussed. It could be looked at.” But we did not seem to be able to come to that. I don’t know if the difference of opinion was 50-50. Probably not, but I think it came quite close…those who would say that we need to do something like that and those who would say we do not. There was a Cardinal who one night, I thought, made a prophetic statement. He said that we are representing the bishops of the Church and we need to listen to the Spirit speaking in the Church. But in terms of what to do in providing the Eucharist more faithfully, we did not seem to be able to move in that direction. The propositions that were made around that were, I would say, quite traditional.

Another thing that came up many times was the question of people, especially in second marriages, who are not able to participate fully in the Eucharist. Again, that was something that was discussed a lot. And I was hoping that we could say that this is an issue that could be looked into, to see if there would be ways and means whereby we could somehow welcome more of those people.

I remember some years back during one of my visits here having had a discussion with one of the Cardinals who was Prefect of a Congregation. We spoke about that subject. He was a very pastoral man; he had been bishop of a diocese. And I remember him saying: “We have to find a pastoral solution for those people.” You know, there are some who don’t really care. But there are a lot of people in second marriages who would love to participate fully in the Eucharist and are not able to. And they are really not able to get out of the situation wherein they find themselves for a variety of reasons.

And along with that, and this was something totally new to me with respect to marriage situations, was polygamy. A number of the African bishops introduced the whole question of polygamy. What are we doing with that? How can we resolve that? How can we invite people in polygamous marriages to be fully initiated into the Eucharist? One of the bishops told of how he was born into a situation where his father was a polygamist with three wives. His father became a Christian. He had been introduced to Jesus and was moving in the direction of initiation into the Church. He had to get rid of some wives. This bishop, with two siblings and his mother, were sent away. The bishop cried as he told this story. This came up several times with the African Church.

Those are two pastoral issues which I felt we could not have resolved, but in some way we could begin to look at them differently.

Well, I would think something which I referred to earlier: the call to deepen the appreciation of the Eucharist. We tried in the Year of the Eucharist to do something. We tried to have people reflect and enter more deeply into the Eucharist. In fact, we produced four videotapes for discussion across the diocese. But I don’t think we did a lot in terms of really renewing people. So I think that would be one thing that I should take back…to try to encourage people. We have the added bonus in Canada that we are preparing for the International Eucharistic Congress in 2008in Quebec City. We are going to be constantly reminding them of this so that the whole nation is preparing for it. 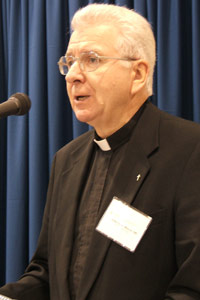 My own intervention at the Synod was about a call to a greater participation of the faithful in the Eucharist. Vatican II spoke so strongly about full, conscious, active participation. That was the primary purpose of liturgical renewal. I think we are really missing out on that. Many people come to the Eucharist without much of an idea what it is about. Nor do they have an awareness of their own call, in virtue of their baptism, to participate in the Eucharist. There are probably four places in the documents of the Vatican Council that talk about the baptized offering the Divine Victim to the Father in the Eucharist. I think that 90% of the baptized people don’t really see themselves, in virtue of their baptismal priesthood, as able to offer the Divine Victim to the Father.

Something else which came out at the Synod was the call to a Eucharistic life for the laity, a call to live the Eucharist in their ordinary, everyday lives. Very closely allied with that is the mission that is ours in virtue of the Eucharist. In fact, one of the propositions deals with somehow elaborating the conclusion to the Eucharist so that it expresses more clearly the mission that is ours as a result of celebrating the Eucharist…not simply, “The Mass is ended: go in peace,” but expressing the “Ite missa est” that we used to have in Latin. We are to go and be Eucharist…the mission is still there but it is not described that clearly. It’s not understood that clearly. So that would be something to work on too. It would be good to give a series of parish missions on the Eucharist too.