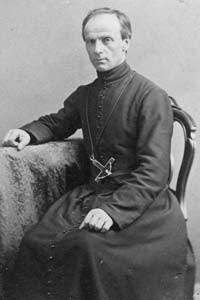 Joseph Eugène Antoine was born at Uriménil, diocese of Saint-Dié, May 1, 1826, son of Marie Anne Morel and Joseph Antoine. Toward the end of his seminary studies at the major seminary of Saint-Dié, he entered the novitiate at Nancy, January 15, 1849 and, on February 17, 1850, he made his oblation in Marseilles where he was ordained to the priesthood by Bishop de Mazenod on September 30 of the same year.

September 4, along with a few other young priests, he had been designated for the missions in Canada. Their transatlantic trip lasted seven months because a violent storm on the Atlantic constrained the ship’s captain to return to England. January 17, 1851 The Founder wrote to Father Antoine and his companions at Plymouth to bolster their courage and urge them to thank God, since he learned, he said: “of the calamities of your voyage which was so dangerous. Clearly, you have only been saved by a miracle.” (Oblate Writings, I, vol. 2, no. 138, p. 5)
Father Antoine’s life was a very busy one as parish priest, preacher and administrator: Saint-Pierre-Apôtre in Montreal from 1851-1852 and 1853-1854; at Sault-Saint-Louis with the Mohawks at Kahnawake in 1852-1853; 1854-1865, superior at Montreal; 1865-1873, master of novices; 1861-1866, provincial of Canada; 1873-1887; Assistant General from 1887 to 1900.

Everywhere he went Father Antoine was deeply loved. The Bishops of Canada presented him twice as a candidate for bishop. Father Lefebvre, the superior at Quebec wrote Father Fabre in 1879 not to let him leave: “The loss of Father Antoine would, for our province, be a genuine tragedy. It is our hope that the General Administration will do everything in their power to ward this blow off from us.” In spite of his administrative duties as superior and as provincial, Father Antoine preached in many parishes and religious communities and served as a spiritual director for a large number of clergy and of the faithful.

Struck down by a car on January 4, in Europe Square in Paris, he died on January 11, 1900 as a result of his injuries and of pneumonia. His body was laid to rest in the Oblate vault in Paris.