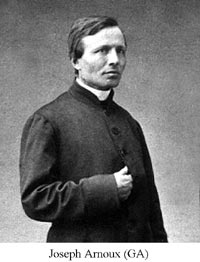 Joseph François Arnoux was born in Saint-André in the diocese of Gap, on 17 January 1825. He was among the first of the juniors in Notre-Dame de Lumières juniorate in 1840. He began his novitiate in Notre-Dame de 1’Osier on 14 August 1842 where he made his oblation on 15 August 1843. From 1843 to 1848 he studied philosophy and theology with the scholastics in the Marseilles major seminary. While on their holidays in Notre-Dame de Lumières in 1844, Father Richard the superior passed a rather negative judgment on the scholastics and “does not accept that they conducted themselves properly except for two of them, Brother Chevalier and Brother Arnoux”. (Founder to Father Bellon, 30 August). Bishop de Mazenod ordained him priest in the Marseilles cathedral on 8 April 1848 and sent him to Notre-Dame de Lumières to minister to the pilgrims.

In January 1847, as he was forming the first group of missionaries for Oregon, the founder was thinking of including Father Arnoux, but in the end it was Father Pandosy whom he sent. In the Spring of 1849 Father Arnoux received his obedience for England after the refusal of Father Palle. “What a difference from this charming Father Arnoux who has not uttered a single word of objection” the Founder wrote to Father Bellon in Maryvale on 13 June 1849: “He left satisfied that obedience alone revealed to him the will of God. You have there an excellent religious who well deserves all the affection I bear him.” He left in May with Father Charles Jolivet. Whenever he mentions him, the Founder describes him as “good religious”, “always so meek, so good, so exemplary”. He might have added “humble and discreet Father Arnoux” as, in the course of his 56 years of ministry in England, where he was often a superior, he attracts little attention. He is neglected too when he died and no obituary seems to have been written. It is possible however to follow him in his various obediences and ministry, thanks to his correspondence, and he figures largely in the Sicklinghall Codex Historicus and made a number of valuable contributions to the Missionary Record.

In England he is first put in charge of the fifteen novices and scholastics who have moved into Maryvale, near Birmingham, just vacated by Newman and some recently converted Anglican ministers. The Founder wrote to him on 20 July 1849: “So now you are installed in your holy house which, I am sure, shall not fall away from its deserved repute while in your hands.”Father Arnoux got to know Newman personally in this period (Missionary Record, 5 (1895), p.390).

When the congregation was divided into provinces in 1851, Fathers Casimir Aubert and Robert Cooke are named respectively provincial and vicar provincial: Father Arnoux is appointed second councillor. The house of formation is then transferred from Maryvale to Lys Marie, Sicklinghall. For health reasons Father Arnoux was sent to Everingham and requested a period of rest in France where he stayed for some months in 1853-1854. From 1854 to 1857 he works in Lys Marie and is superior and master of novices from September 1856 to 1858 after the departure of Father Gustave Richard for Ireland and before the arrival of Father Prosper Boisramé. Thus he was host to the Founder when he made his visit in 1857. Father Arnoux went to Leeds to meet him, and we read in the Sicklinghall Codex: “28 July – …Oh! the happy moment for Fr. Superior – when he embraced (and with him) when the whole Lys Marie Community embraced our Beloved founder. A stranger present could not but remark to him afterwards: “how affectionate was that embrace you gave one another” Ah, he did not know the strength of the ties which unite us for ever and ever…”

In 1856 Father Cooke, provincial, succeeded in making a first foundation in Ireland in Inchicore near Dublin. Father Arnoux was named superior of this community from 1858 to April 1861(Codex historicus Inchicore). While here he participated in the important decision to accept the invitation to undertake the work of the Glencree reformatory: he tells the story in the Missionary Record 12 [1902] pp.158-163. The main work of the Inchicore community was giving missions, and in 1860 Father Vincens wrote to Fr. Arnoux; “Frankly the missions given by our Fathers in Ireland vie for success with those given by Fr. de Mazenod and his first companions in France. I cannot understand how Fr. Cooke and his fellow-labourers can cope with such overwhelming work.” (De Mazenod Record, 17 (1949) p.19) Also during his period of office in Inchicore his mother died and he returned to France for a brief period. From 1862-1866 he is again in Sicklinghall as director; the mission was reduced to the status of residence on the departure of the novitiate. Here he was responsible for ministering to some 250 Catholics in the area, dispersed among some 5000 Anglicans and Protestants. He was here in 1863 to receive Father Fabre on his visit as superior general. While here too he often accompanied Father Cooke and others on parochial missions. In November 1865 he visited France again on family business. On his way back he was in London for the opening of the temporary church of the English Martyrs by Cardinal Manning on 12 December 1865. In the summer of 1866 he was named director of Kilburn, a London suburb, taking the place of Father Crawley who had fallen ill. He was deeply attached to this mission and worked here until 1878. In 1876 we find him attending the superiors’ retreat in Autun as superior of Kilburn. From 1878-1879 he was in Belmont in Ireland.

According to his correspondence and the first Personnels, Father Arnoux continues to busy himself in a pastoral way in a variety of communities: Rock Ferry (1879-1881), Kilburn (1881-1882), Sicklinghall 18824890), Inchicore (1890), Rock Ferry, (1891-1996), and Belmont House (1896-1900). In Missions OMI from these years we read: “Father Arnoux, our doyen, grows holy in the retirement of the Belmont novitiate.” “Arnoux, socius of the novice master, one of the most venerable personages in the province and even in the Congregation.” From 1901 he is in the Philipstown community (the Reformatory for young offenders in Ireland). He attended the consecration of Bishop Gaughren in Leith in March 1902. He died in Philipstown on 5 September 1905 aged 90. He is buried in Inchicore.

In his correspondence especially with Father Fabre and through various articles published in the Missionary Record, we pick up some personal details and much historical information on the history of the Anglo-Irish province. In volume 3 (1894) page 141, he is described as: “That treasure house of old traditions.” He emerges above all as a humble, available man. He habitually tells his superiors that he is always ready for fresh missions. As we have seen, the Founder thought of sending him to Oregon, and later to Texas. In 1870 he offered his services as a chaplain to the French or English armies. On 24 December 1889 the provincial tells him that he will soon receive a quite different destination: to supply here and there for sick or absent priests. He answers: “The soldier must always be ready for anything: it should be the same for the Oblate who for so many years has been serving under the banner of the Immaculate Conception.”

In 1890 he is spokesman for the English fathers who complain of the bad food given to the scholastics in Holland. “The community bursar fulfils too literally his title of ‘économe’, he writes to Father Fabre. “He gives the fathers and brothers the worst food and drink around, except for the cheese, which cannot be bad in Holland. People know this and vocations are no longer coming. The scholasticate will have to be opened again in Ireland as the other religious congregations are doing”.

During his last years Father Arnoux is something of a pessimist, often speaking of the problems posed in houses through want of charity and regularity. On 4 June 1891 he goes so far as to say religious life is no longer to be found in many communities and that because of this young people prefer to enter the diocesan clergy.