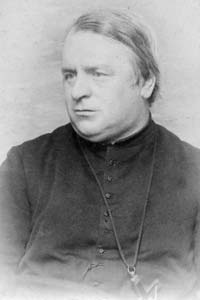 Victor Baret was born in Avignon on September 7, 1830, son of Julie Arnaud and Michel François Baret, locksmith. He was the youngest child of this family of seven children. The fourth child was Charles, an Oblate like him. Victor made his secondary studies at Forcalquier and at Notre-Dame de Lumières. He entered the novitiate of Notre-Dame de l’Osier on October 22, 1847 and made his oblation on November 1, 1848. He was admitted to vows in the General Council session of October 2 of that year. In his report, the secretary general wrote: “This admission to vows was not without its problems. This candidate, whose formation seems to still leave something to be desired, is not lacking in intelligence as our initial fears had led us to believe. There is rather another more delicate matter that would lead us to have some misgivings.” In Father Baret’s obituary, we find an allusion to this rather enigmatic reference. In fact, we read in this obituary: “The health of the young minor seminarian was fragile, and ever continued to be so […] Frail in appearance, pale but very expressive and delicate of face, we would have thought of him as a young girl in a cassock!” After six years of philosophy and theology at the major seminary of Marseilles, he was ordained to the priesthood by Bishop de Mazenod on June 25, 1854.

In 1854-1855, he lived at Notre-Dame de la Garde. He taught philosophy at the major seminary of Marseilles for two years (1855-1857) and was given an obedience for Notre-Dame de l’Osier where he was a mission preacher in 1857-1859. He then taught philosophy at the scholasticate of Montolivet from 1859 to 1862. He was sent once again to Notre-Dame de l’Osier as mission preacher in 1863-1867 and as parish priest from 1867 to 1869. Father Victor preached well, but his zeal far outstripped what his physical strength and the volume of his voice could deliver. He was not able to take part in parish missions, but found good success in speaking to small audiences.

In 1869 Father Victor was appointed to serve as chaplain at the novitiate of the Sisters of the Holy Family of Bordeaux at Royaumont and at an orphanage run by these same nuns. That is where he spent the rest of his life. His ministry was very much appreciated by the nuns. The author of his obituary wrote: “A prudent and tactful spiritual director, he never complained of being overloaded with work. Always pleasant and smiling, when anyone asked him to do anything, the response that was ever on his lips was: Here I am.”

In 1893, he was stricken with deafness and was no longer able to hear confessions. From 1896 on, paralysis prevented him from preaching. What remained for him was prayer and carpentry in which field he was an expert, producing altars, repositories, stations of the cross, etc. When religious were expelled from France in 1903, the Sisters of the Holy Family welcomed him into their novitiate at Bas-Oha in Belgium. That is where he died of a stroke on January 5, 1907.