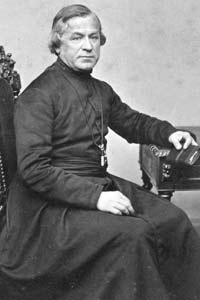 Marcellin Beuf was born at Bras in the diocese of Fréjus on April 6, 1820. After his studies at the minor seminary of Brignoles and at the major seminary, at the age of 27, he entered the novitiate of Notre-Dame de l’Osier on October 31, 1847 where he made his oblation on November 1, 1848. In accepting him for vows, the October 2, 1848, General Council report states: “As for Brother Beuf, a mark against him is his not being accepted into the major seminary of Fréjus. But we have grounds that indicate to us that it was nothing serious. His conduct at the novitiate, rather amibiguous in its first months, grew better little by little and then became entirely satisfactory. Endowed with ordinary talent, he could still make himself useful.” After a few months with the scholastics at the major seminary in Marseilles, he was ordained to the priesthood by Bishop de Mazenod on March 3, 1849.

The author of his obituary wrote that Father Beuf was “brimming with human kindness and goodness behind a bluff exterior which sometimes provoked surprise or a smile.” Since he had come into some money by way of inheritance, as parish priest at Notre-Dame de l’Osier, he helped out the poor and unfortunate members of the parish a great deal.

Afflicted with illness in 1895, he asked and was granted permission to go to Notre-Dame de l’Osier to recuperate. That is where he spent the most productive years of his ministry. It was there that he died at 78 years of age on October 1, 1898.