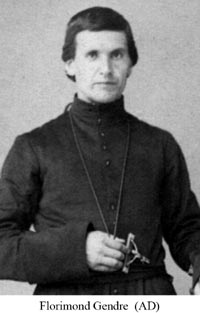 Florimond Gendre was born on December 7, 1834, Saint-Jean-des-Crottes, diocese of Gap, France,. His parents were Jean Gendre and Catherine Faure. After a year of theology in the major seminary of Gap, he began his novitiate in Notre-Dame de l’Osier on October 19, 1859. The novice master, Father Florent Vandenberghe and Father Antoine Mouchet the moderator of scholastics in Montolivet where he finished his theological studies in 1860-1862, found him to be “quite good, applying himself zealously to all his duties” but “subject to sudden change because of his easily impressed imagination”. He made his first vows in the presence of Bishop Hippolyte Guibert on February 17, 1861 and was ordained priest in Marseilles by Bishop Cruice, successor to Bishop de Mazenod, on June 29, 1862. He was immediately sent to British Colombia. After his name in the Personnel Register of 1862 we find written; “He left in the month of September with Father D’Herbomez… In the Novitiate and scholasticate he was an edifying subject. With an ardent and impressionable imagination, he was always wanted to be totally devoted. His capabilities are quite ordinary and there is a lack of culture in his studies. His health is robust, he is of large build and without any special talent.”

From 1862 to 1866 he worked in mission of Sainte-Marie, about 50 kilometres from New Westminster and there he founded an agricultural and industrial school for the Indians. He was director, treasurer, teacher of English, writing, arithmetic, geography, master of agriculture and supervisor for the 60 pupils. During the summer vacation period he visited the Amerindians along the Fraser River.

In 1866, because he was suffering from exhaustion, he was sent to Immaculate Conception mission on Lake Okanagan and there he remained until his death. He founded a school there for the Indians, but it lasted only a few years. For a time each year he visited eight mission centres including Kamloops, He was ill during the winter of 1871-1872 but succeeded nevertheless in visiting Kamloops in the summer of 1872 and again in November. It was there that he became seriously ill. Father J. M. Baudre brought him back to Kamloops where he died on January 29, 1873.

In 1873, the writer of the report on the vicariate of British Colombia has this to say: “What am I to say about Father Gendre, this model of the perfect missionary and perfect religious? In spite of his vigorous constitution, he exhausted himself by excessive work. He died the victim of his dedication for the sake of these beloved Savages whom he loved more than life itself”. (Missions OMI, 11, 1873, p. 340).