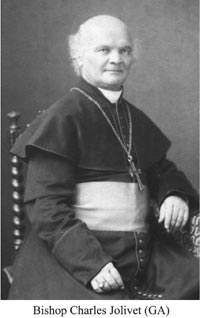 Charles Constant Jolivet was born on January 9, 1826, at Pont-l’Abbé in the diocese of Quimper, France. He was the second of twelve children. His parents were François Jolivet, a roofer, and Sophie Farcy. He studied at the minor seminary of Pont-Croix from 1839 to 1844, and at the major seminary of Quimper from 1844 to 1848. He was finishing his theological studies when he heard a sermon by Father Léonard Baveux and decided to become an Oblate. He began his novitiate in Nancy on March 9, 1848 and made his vows on March 10, 1849. In March 1849 the novice master wrote about him: “Jolivet: has finished his theology course and seems to have sufficient intellectual ability. He would have gained more from his studies if he had been more studious; he is naturally lazy and frivolous. He has lost a lot of time. Nevertheless he is quite devout and is endowed with much docility, simplicity and gentleness.” Towards the end of his novitiate the opinion of the novice master is more positive: “Jolivet: he is progressing more and more. He has a most charming character and the simplicity of his ways as well as his equilibrium and good humour endear him to all his confreres. He adapts easily to everything, is quite fond of mortification and shows the greatest respect towards his superiors. He seems to have sufficient ability. He writes easily. I believe that he will be successful as a preacher, although his lack of height will not be in his favour.”

He was ordained at Nancy by Bishop A. B. Menjaud on March 13, 1849 and he celebrated his First Mass on the 17th and left immediately for England. His first ministry was in Everingham from 1849 to 1857. He was then superior in Liverpool from 1857 to 1867. In the general chapter held in Autun in 1867 he was elected Assistant General. In this capacity he did a canonical visitation of the Oblates in British Colombia from April 1868 to January 1869. He was re-elected assistant in the General Chapter of 1873.

Vicar Apostolic of Natal from 1874 to 1903
On September 15, 1874, Father Jolivet was appointed titular Bishop of Belline and Vicar apostolic of Natal. On the following November 30, he was ordained bishop by Archbishop Hippolyte Guibert of Tours in the chapel of the Oblate General House on Rue de Saint-Petersbourg, in Paris. He arrived in Durban on March 4, 1875 and established his residence in Pietermaritzburg. At the time of his arrival the vicariate had two residences in the Natal area: Durban and Pietermaritzburg. In Basutoland there was the residence of Roma and a few mission stations. There were two residences in Bloemfontein, one in the city itself and another in The Diamond Fields.

His predecessor, Bishop Allard, had been accused of not travelling very much. Bishop Jolivet spent six months travelling every year. He visited especially Basutoland in 1875, 1877, 1878, 1879, 1881, 1883, 1884, 1885 and 1886. He returned there again in 1996, after the division of the vicariate. He opened Catholic schools everywhere and also some hospitals. He had a number of churches and chapels built. He called upon a number of Religious Congregations to come to the vicariate: the Sisters of the Holy Family of Bordeaux, the Augustine Sisters, the Dominican Sisters, the Sisters of the Holy Cross, the Daughters of Jesus of Kermaria, the Sisters of Nazareth, the Trappistine Sisters, and he also welcomed the Trappists to Marianhill. They founded many missions among the black people. The author of his necrology notice in Petites Annales writes: “He found 6 priests on arrival, in 1903 there were 114; the number of Brothers increased from 3 to 284; the number of Sisters from 8 to 867; churches increased from 6 to 81, convents from 1 to 14 and in 1903 there were 93 chapels.”

In 1886 he had the vicariate divided. By decree of March 15, 1886, which was confirmed by the brief of June 4, the Congregation of Propaganda created the Apostolic vicariate of the Free State of Orange which included Basutoland, the prefecture of the Transvaal and the Vicariate of Natal to the East.

In 1897 there was a solemn celebration in Durban, Pietermaritzburg and Marianhill on the occasion of his fiftieth year of religious life and twenty-five years of episcopacy.

In the period 1900-1902 the Boer War brought him much suffering and greatly impoverished his vicariate at a time when he was building the cathedral in Durban, another church, the bishop’s residence and a number of boys’ schools.

Bishop Jolivet continued to travel, to preach and to hear confessions until the end of his life. In April 1903 he felt the first painful attacks of prostate cancer, which was to take him away from his beloved flock. He died in Durban on September 15, 1903.