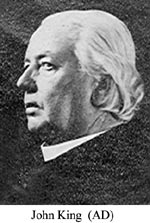 ohn King was born in Belfast, Ireland, in the diocese of Down and Connor, on 20 October 1833. He began his novitiate on 20 June 1855 in Sicklinghall, where he made his oblation on 8 September 1856. The master of novices wrote about him in 1856: “J. King: good health, good temperament, good sacristan, plenty of talent and common sense, with a sufficiency of virtue.” He studied theology in Montolivet, Marseilles. In his reports on the scholastics Father Antoine Mouchette mentions him only once, in 1858: “King, his taciturn temperament would tell against him if one judged by externals; he has talent and piety, he is also deficient sometimes in exactitude in small things.” After his ordination by Bishop de Mazenod on 24 June 1860, he exercised his ministry entirely in Ireland and England. On the basis of his letters and some simple mentions of him in Missions OMI and the Missionary Record, he worked in Liverpool in 1862, Glencree in 1865-1867, he was in charge in Rock Ferry in 1868 after the departure of Father Jolivet, in Tower Hill in 1869, Holy Cross Liverpool in 1871, superior in Rock Ferry in 1873-1879, and thereafter in Glencree (1879-1895) where he was first procurator and then superior. He was a member of the Inchicore community in 1895. He was a member of the provincial council during Fr. Gubbins’ first term as provincial (1877-1880). He is mentioned as present in Sicklinghall when the Superior General visited in 1881. His short obituary in the Missionary Record remembers especially his contribution to the building of the parish church in Rock Ferry, which he initiated, and his work as superior of Glencree. Another entry in the Record refers to his “judgement, tact and experience” in connection with his work as superior of Glencree. He accompanied Father Ring on the great pilgrimage to Rome of 1893.

He died in Inchicore on 24 May 1895 after a short illness and is buried there.