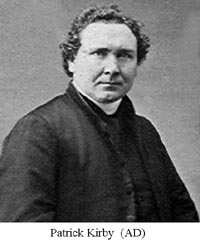 Patrick Kirby was born in Rathjordan, Herbertstown, Co. Limerick, Ireland, in the diocese of Cashel, on 3 August 1827. After his studies in Thurles College, he began his novitiate on 14 July 1849 in Penzance, continued it in Ashbourne, Market Weighton and Maryvale, where he made his oblation on 15 July 1849. He began his studies for the priesthood in Maryvale (Old Oscott) and finished them in Marseilles in 1851-1852. Father Marchal, scholasticate formator, wrote in July 1852: “Brother Kirby during the year he has passed in Marseilles has always demonstrated a good temperament, a good moral sense, love for his brothers and from the general character of Irishmen takes only a certain attachment to his national ideas so that it is only with difficulty and much debate that he is able to accept the ideas of his French brothers. He has always shown commitment, regularity and outward submission…” Bishop de Mazenod ordained him priest on 27 July 1852 and gave him an obedience for the British Province. In 1853 he had Holy Cross Liverpool in mind for him. In a letter dated 1 December 1853 to Father P. J. Amisse he said: “You are to receive Rev. Fr. Kirby. This Father is an excellent member in every respect, he is pious, regular, full of zeal and talent, and enjoys good health.” Although the Founder destined him for the Liverpool community, it was to the newly opened mission of Mount St. Mary’s Leeds that he went. He was resident there certainly from October 1853 (Sicklinghall Codex) and the same source shows him still there in 1867. As a member of this community he contributed to the building up of this mission into a thriving Catholic community the story of which is told elsewhere.

Thereafter for almost his entire life, apart from some time in Leith (1892) in Scotland, he was attached to the Inchicore community first as a missionary and then as superior from 1871 to 1877. He is acknowledged as in the first rank of the Oblate missionaries of this period. His obituary notice describes him in these words: “He was a very imposing figure. His tall, massive frame was splendidly proportioned and spoke of unlimited energy. His powerful head, broad, athletic shoulders, piercing eyes, and rich musical voice won the sympathy of his hearers from the start and rendered them docile to his words, while the energy of his gestures confirmed the impression that he was indeed a soldier of Christ, fighting valiantly for his Master. To these qualities he joined a wide classical and literary knowledge, together with a profound grasp of theology and Scripture. Nor must we overlook the note of joviality and humour which characterized him all through life…”

Father Pourpore adds “he was also a very successful preacher of retreats.” He was still active until late in his long life: in July 1893 he preached the pastoral retreats of the diocese of Killaloe with Fr. Shinnors.

The 1920 obituary notice refers obscurely to a time of trial in his life when he was removed for a short period by provincial authority from the mission band, only to be reinstated eventually with honour. The “submission” noted by his formators never failed him.

In his last days his health broke down and he became a shadow of his former self. He died aged 80 in Inchicore on 27 April 1907, and is buried in Inchicore.