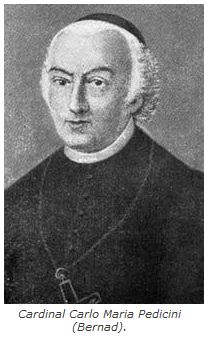 Carlo Maria Pedicini was born on November 2, 1769 in Beneventum near Naples. After having embraced the clerical state, he worked as secretary of the Congregation of the Propaganda from 1816 to 1823. Created cardinal by Pius VII in 1823, he then held different positions in the Roman Curia and, at the same time, was bishop of Palestrina from 1830 to 1840, then of Porto, near Rome from 1840 to 1843. Leaving behind the reputation of being a man of great virtue, he died in Rome on November 19, 1843.

Father de Mazenod knew him in Rome in 1825-1826 when the Cardinal was the prefect for the Congregation of Ecclesiastical Immunity. On December 29, 1825, Cardinal Pacca gave Father de Mazenod a letter of recommendation written to the Cardinal’s “friend, compatriot and relative,” Cardinal Pedicini, appointed ponent or chairman of the “business” of the approbation of the rule. Subsequently, the Founder went to see him twelve times at his home. On January 2, his second visit disheartened him. He thought that the chairman would make a report which would be sent to each of the cardinals who were members of the Congregation of Bishops and Regulars. “Not at all,” he wrote in a letter to Father Tempier, “He has to read our big volume and annexed documents and the same big volume has to be passed on successively to all six of the other Cardinals who each in turn will make an attentive reading of it. Truly must I regret not being content with the direct approbation of our Bishops and the indirect one of the Pope! If at least we were able to obtain what we desire, but nothing is more doubtful. The Cardinals will no doubt be wiser than the Pope. However, we have his particular opinion and it is a pity that he considers himself obliged to observe the formalities which crush us.” (Oblate Writings I, vol. 7, no. 215, p. 2-3)

However, everything went along better than expected. Leo XII allowed them to form a committee of only three cardinals, one of whom was Cardinal Pedicini. In spite of the tardiness of Cardinal Pacca, the committee met on February 15 and approved the Rule. The cardinal chairman subsequently received the Founder on several occasions and the Founder judged him to be “a very meticulous man, one who carries out the responsibilities entrusted to him as an obligation in conscience.” On February 20, he went to visit him to thank him for his dedication.

When the Founder was obliged to make two trips to Rome in 1832 and 1833 to deal with the Icosia affair, Cardinal Pedicini was the prefect of the Congregation of Propaganda. On April 10, 1832, Father de Mazenod wrote to him suggesting that the Oblates be sent to Algeria. However, in July of 1833, it was Cardinal Pedicini who wrote to the bishop of Icosia to let him know that the Pope was calling him to Rome. He went to visit him as soon as he arrived in Rome a little after August 15 and learned that he had been denounced as being the Marseilles leader of the opponents to the king Louis-Philippe and his government. (see article: Icosia, Bishop of)