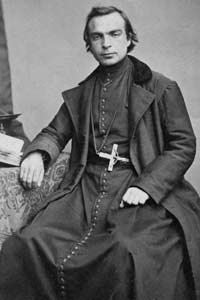 Lucien Reynaud was born at La Roquebrussanne in the diocese of Fréjus on January 7, 1836. He began his novitiate at Notre-Dame de l’Osier on December 7, 1855 and made his oblation at Montolivet on December 8, 1856. In the General Council session of November 27, 1856, he was admitted to vows. In his report of the session, the secretary wrote: “When they sent him to the novitiate last year, the priests of the seminary at Fréjus justifiably presented him as a good candidate under every aspect. He made almost his entire novitiate at l’Osier where he was a model in his prayer life and regular in his observance and never gave occasion for any remarks which would have been to his disadvantage except for in letting himself be carried away a bit too much with regard to his natural enthusiasm for what is good, a fact that could have rendered him somewhat harsh and demanding with regard to his confreres. The short time since he arrived with the other novices at Montolivet has only confirmed the good reports we had from him from Fréjus as well as from Osier…”

He studied theology at Montolivet from 1856 to 1859. In his reports, Father Mouchette, moderator of scholastics, offered a very favourable judgment on him every year. For example, “1856, fiery in imagination and character. He needs tempering. His virtue, his humility, at least, needs to be tested. Very regular in his observance; 1857, his health has been a bit weakened. A first class religious, zealous with regard to his perfection and the salvation of souls; 1858, brimming with good will, prayerful, zealous, has a great gentleness and is very tractable. 1859, very good, but too active and too effervescent. He would need to be spared because of his health which he always believes is stronger than it actually is. As he is, I see him as an excellent candidate capable of doing a lot of good. He has a great facility when it comes to preaching. In this regard, he would be very good if he was well trained.” In the Personnel Registry of 1862-1863, they added: “Above average talent. Ready speech.”

He was ordained to the priesthood by Bishop de Mazenod on June 23, 1859 and was immediately sent as a professor to the church school in Vico. But, with little delay, his talent for preaching was put at the service of the faithful. His whole life through he preached Advent series, Lenten series missions and retreats in many dioceses. From what we learn from a few O.M.I. Personnels and the mentions made of him in Missions O.M.I., we can discern more or less which communities, especially in province Nord, he used as his centre: Talence in 1861-1862, Paris in 1863-1865, Sacred Heart scholasticate in Autun in 1865-1867. There is mention of his successes in the very first missions he preached. That is why, it seems, that he was appointed professor of eloquence at the scholasticate. In this regard, we read in a report written by Father Fabre, the superior (Missions O.M.I., 1865, P. 397): retreat to the scholastic brothers “presented with a great deal of energy and zeal by Reverend Father Reynaud. The most difficult subjects, the most practical truths were handled with that facility and warmth which characterize this beloved priest and which make us appreciate ever more every day the choice you have made of him to direct our young men in their sermon writing.”

Nothing has been written about him, but he wrote Notice biographique de M. Loewenbruck, missionnaire apostolique (Angers, 1876, 32 pages) and Notice du père Marius Roux, o.m.i., published in La Semaine religieuse d’Angers in 1895.