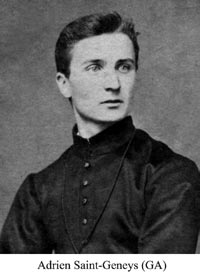 Adrien Saint-Geneys was born in Manas, diocese of Valence, France, on July 28, 1828. He began his novitiate in Notre-Dame de l’Osier on October 5, 1850, and took vows in Marseilles on October 6, 1851. According to the report given by Father Jacques Santoni, novice master, the Brother had hesitated at the beginning to choose the Oblates or the Trappists. He decided to remain in the novitiate but his health was weak and he “was apathetic and inconsistent” He made his scholasticate in the major seminary in Marseilles from 1851 to 1854. Father Antoine Mouchette, the moderator of scholastics, also found that he was “hesitant in character, everywhere and always; as a result he was lacking in generosity in matters of mortification, he became attached to a great number of little things.” He made some progress in 1854 and the moderator wrote then: “His appointment to Ceylon has changed him completely. He works very arduously, he is no longer worried about little matters of health. I am pleased with him.” Bishop de Mazenod ordained him to the priesthood on April 23, 1854.

Having arrived in Ceylon in June, he studied Tamil and worked in a number of missions, especially Batticaloa in 1854, Point Pedro in 1855, Passaiyoor, Valigamam in 1862-1863, Myliddy in 1864, Madhu, Mannar in 1869, Mullaitivu, Jaffna in 1875, Delft, Kayts in 1877. The author of his short necrology note in Missions OMI says: “Everywhere he witnessed to the glory of God and the salvation of souls with consistent zeal; everywhere he was able to win affection and esteem by the characteristics which were the significant traits of his personality: goodness, constant cheerfulness, the quiet equilibrium of his character in the most painful circumstances. Another mark of his apostolate was the incredible trouble he took to soothe the divisions caused by the Goan schismatics and the courageous energy with which he fought the followers of this pernicious schism.

At the end of his life, Father Saint-Geneys was withdrawn from the active ministry of the missions and appointed spiritual director in Jaffna college. He was there for five years. His health deteriorated rapidly from the beginning of 1901 and he died on April 24 of that year.