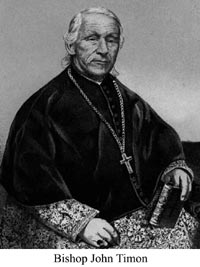 John Timon was born on February 12, 1797, in Conewago Township, Pennsylvania, U.S.A. His family moved several times to different towns in the United States. He entered the seminary in Saint Louis in 1882 and continued in the Vincentian seminary of Saint Mary of the Barrens, in the county of Perry. He took vows on June 10, 1825 and was ordained to the priesthood on September 23, 1826.

During ten years he worked in the Vincentian seminary, while being pastor and preaching missions. In 1835, Bishop Rosati of Saint Louis wrote to the Congregation of Propaganda Fide saying that Father Timon had converted and brought back to the faith more people than all the other priests together. The bishops of America put forward his name as a coadjutor in Saint Louis. From 1835 to 1847 he was provincial superior of the Vincentians while at the same time he was vicar general of Saint Louis, and prefect apostolic of Texas from 1839 to 1841.

On April 23, 1847, Pius IX appointed him first bishop of Buffalo. Bishop John Hughes of New York ordained him to the episcopacy on October 17 in Saint Patrick’s cathedral, New York. Bishop Timon had the cathedral of Saint Joseph built and he also founded many parishes as well as some colleges and two seminaries.

Relations with the Oblates
On his way to Rome, Bishop Timon visited Marseilles at the end of December 1849 and the beginning of January 1850. He asked for three Oblates, “one of whom should speak English well.” In his Diary for December 26, Bishop de Mazenod wrote: “Visit of Bishop Timon. So great is the confidence which this prelate inspires in me that I will not refuse his request.” The general council, in its meeting on January 4, agreed to this plan and named Father Julien Pierre Amisse as superior. On January 7, Bishop Timon submitted a written account of his intentions. He was entrusting to the Oblates a college that was scarcely begun. They were to “be entirely and absolutely in charge of it.” He would try to obtain for them land on which to build a French church and, if he could, he would build a wooden church. “It is my heartfelt wish,” he added, “that they should have the absolute right to live according to their rule and to follow their customs.” Bishop de Mazenod willingly gave his consent to this plan “because of the good that our Congregation will be able to do in that country”, as he wrote in his Diary on April 16.

On his way back from Rome Bishop Timon did not call in Marseilles but he met the Founder again, about June 20, in the residence of the Duke of Arundel in London and in the Oblate house in Maryvale some days later. The bishop of Buffalo sailed from Liverpool while Fathers Pierre Amisse, François-Xavier Pourret and Richard Molony left from Le Havre on June 19. On July 22 they arrived in New York where Bishop Timon was awaiting them. Writing from Maryvale on June 23, the Founder told Father Tempier to have Bishop Timon pay the fares of the three missionaries because “he had received plenty of money everywhere he went.”

The Fathers stayed at the bishop’s house but they immediately understood that nothing had been prepared for their arrival. Two weeks after their arrival they left for Montreal and arrived there on August 16. Bishop Guigues was in Europe for the General Chapter, which was held from August 26 to 31, and was delegated to go and see the situation in Buffalo when he returned. He arrived in Montreal at the end of November 1850 and instead of going to Buffalo he wrote to Bishop Timon. At the beginning of December he said that the Oblates were still available but that it was not possible for them to make even the smallest financial contribution. “The Oblates will willingly give their work, their sweat, but they find that they are condemned to have the establishment of their residence and their maintenance paid for by the bishops.”

At that point Bishop Armand de Charbonnel of Toronto intervened. He had heard that three Oblates, who had come for Buffalo, had not gone there. He asked to have them for Toronto. Bishop Timon agreed but he asked that the Oblates should come to him later. Bishop Guigues did not send the Oblates either to Toronto or to Buffalo. He left that decision to Father Tempier who made a canonical visitation in Canada during the summer of 1851. He chose Buffalo and, on July 31, he signed a contract with Bishop Timon. The Oblates were to take over the direction of the Catholic college, which served also as a major seminary, and the service of the chapel beside the bishop’s residence. They could purchase land on which to build a residence, the college and the church, which was to become a parish. The college students and the seminarians would pay a fee, etc

Mid-August saw the arrival in Buffalo of Fathers Édouard Chevalier, superior, Alexandre Soulerin and William Corbett. They were soon followed by Fathers Richard Moloney and Alexandre Trudeau. Father Jacques Santoni, the new provincial superior in Canada, was very displeased with the decision made by Father Tempier, a decision taken without consulting the Fathers in Canada. On August 14 he wrote: “This measure seems to be to have been taken excessively lightly.” In 1852, Father Chevalier purchased an immense piece of land with money received from the general house and he continued to ask for more. Some buildings, which were already on the site, were repaired and adapted to the needs of the college. During summer 1855, Father Chevalier needed money for the college and he asked for a sum of money, which had been promised by the bishop. The latter refused and Father Santoni withdrew the priests from the institution, in spite of the protests of Bishop Timon. The provincial informed Bishop de Mazenod of what had happened and received a reply dated October 9, 1855: “What position must we take here? Obviously, we must accept what has happened… It remains to be seen if the bishop of Buffalo will agree with your idea of separating the seminary from the college which you are abandoning.” The seminarians boarded in the bishop’s house and Father Chevalier continued teaching until 1857. The Oblates remained in Holy Angels parish. Between 1856 and 1859 they had a magnificent church built on the land. It was blessed on May 10, 1859 by Bishop Timon assisted by Bishop Guigues. In 1857, they also opened a school, which was entrusted to the Grey Nuns of Ottawa. At the request of Bishop Timon the Oblates preached many mission in the diocese of Buffalo and in the surrounding dioceses also.

After the abandonment of the college, relations between Father Chevalier and Bishop Timon became somewhat difficult. The bishop was continually asking the pastors for money for the cemetery, for the establishment of the Brothers of the Christian Schools and various charities, while the parish of Holy Angels was poor and in debt. On October 11, 1861, Father Chevalier addressed a letter to Cardinal Barnabò, Prefect of the Congregation of Propaganda in Rome, explaining his complaints. The cardinal replied on November 27 with words of encouragement and promising that he would “give suitable notice” to Bishop Timon. Having received those “suitable notices”, the bishop left for Rome and, on February 4, 1862, he left a long letter for the cardinal. He recalled the hasty departure of the Oblates in 1850, the abandonment of the college in 1855 in spite his protestations and he refuted all the accusations made by Father Chevalier. He added that the Oblates were critical of his administration and he added: “In many dioceses, these good Oblates, according to what I hear, have the reputation of having people believe that there is a lot of holiness in their midst, but there is very little of it outside, and what little there is they never speak about it; rather it is always about evil…”

Knowing that Father Fabre would learn of the matter from Cardinal Barnabò, Father Chevalier wrote to him on April 23. He wrote, among other things: “Bishop Timon is, quite simply, mischievous (I was going to say, dishonest), and he twists everything to his own advantage…” Nevertheless he said he had respect and affection for the bishop. The bishop said the same thing about Father Chevalier and about the Oblates whom he wanted to keep for parish missions.

On his return from Rome Bishop Timon demanded that Father Chevalier sign a declaration prepared by the bishop himself stating that his letter of October 11 to the cardinal did not conform to the truth. Father refused to sign the document that he regarded as being contrary to the truth. Bishop Timon then withdrew all his powers in the diocese and, on August 29, 1862, he demanded that Father Chevalier be recalled. Fathers Chevalier and Joseph Guillard left Buffalo in mid-September. Bishop Guigues had intervened on a number of occasions to calm the troubled waters. He now replaced Father Chevalier with Father Garin who arrived in November. Bishop Guigues wanted to withdraw the Oblates from Buffalo altogether but the new superior assured him that they had a beautiful future there. His relations with Bishop Timon were good enough but the latter wanted to see the account books of the Oblates, saying that they exaggerated the debts of the parish. He also wanted the Oblates to provide financial help for the Grey Nuns to build a convent.

These matters were not yet settled when Bishop Timon died on April 16, 1867. The Oblates are still today the pastors of Holy Angels parish in Buffalo.