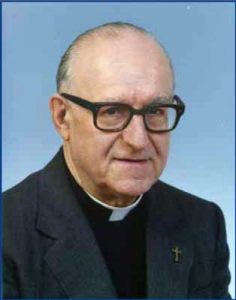 Born in 1921 at Sainte-Rose-de-Lavalnear Montreal Fr. Fernand Jetté made his first religious profession in 1941 and was ordained a priest in Ottawa in 1947. After studies in Rome and Paris he taught missiology and spirituality at Ottawa University and Saint Paul University and was a member of the staff of Saint-Joseph Scholasticate of which he was Superior from 1965 to 1967. He had been Vicar Provincial of Saint-Joseph Province since 1968 when he was elected delegate to the General Chapter of 1972. At Chapter he was elected to the newly-created post of Vicar General of the Congregation. On November 26 1974 he was elected Superior General to succeed Fr. Richard Hanley who had resigned the previous June. Father Jetté was reelected to that post in 1980. As Superior General he had the joy of seeing the Founder beatified in 1975 and he presided over the definitive postconciliar revision of the Constitutions and Rules approved by the General Chapter of 1980 and by the Holy See in 1982. From 1986 he lived in retirement at Édifice Deschâtelets in Ottawa consecrating most of his time to writing spiritual direction and prayer. In recent years he suffered much from osteoporosis and cardiac problems. His last letter to the Superior General Wilhelm Steckling dated three weeks before his death hints at the burden of his infirmities.