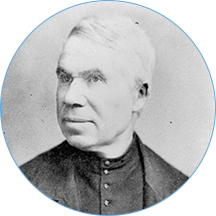 Louis Soullier was born at Meymac in the diocese of Tulle on March 26, 1826, son of Léonard Soullier et of Marie-Jeanne Julie Gorse. The second eldest in the family of eight children, he studied at the minor seminary of Servières. He entered the major seminary of Tulle (Corrèze) October 1, 1846. Because of his attraction for the missions, as a result of talks given at the major seminary by Father Léonard Baveux, Oblate missionary in Canada, he entered the novitiate of Notre-Dame de l’Osier on February 12, 1848 and made his oblation at Marseilles on February 17, 1849. He then completed his seminary studies at the major seminary in Marseilles and was ordained to the priesthood at Marseilles by Bishop Eugene de Mazenod on May 25, 1850.

From 1850 to 1861, Father Soullier dedicated himself especially to the ministry of preaching missions. Other activities took up his time during this period. Initially assigned to the community in Nancy (1850-1854), he collaborated in resurrecting the shrine of Notre-Dame de Sion which was thrown into disorder by the presence of heretics. In the house of Limoges (1854-1855), he fulfilled the role of superior. Returning to Nancy (1855-1858), he took on the same function and took an active part in ministry at the shrine of Notre-Dame de Sion which was served by the community. Two years later, he was called to found a house of mission preachers at Autun and became its first superior (1858-1860). Finally, in 1860, he opened up a new house of mission preachers, this one at Angers, of which he was as well the new superior.

In July 1861, he ceased preaching large missions to take on the responsibility of vice-director of the Association of the Holy Family of Bordeaux. In his tireless zeal, he expended his energy, not only ministering to the religious sisters of the motherhouse in Bordeaux, but also to the members of the Association in the other houses he visited. Shortly after his appointment to Bordeaux, he took on as well for a few months (July-December, 1861) the responsibility of vice-provincial of the province France-Nord.

The General Chapter held in Paris in 1867 elected Father Soullier as first assistant in the General Council of the Congregation, a function he carried out until his election as Superior General. In addition to his important participation in the work of the General Council, he supported the Superior General in his outside relations and visited the provinces and vicariates in the missions. Consequently, in addition to the provinces of Europe, he visited the province of Canada and the vicariate of Saint Boniface (1876) the missions of Texas (1876), the vicariates of Ceylon (1878), the vicariates of Saint Boniface, Saint Albert and Mackenzie in Canada’s West and North (1883) and the missions of South Africa (1888). Everywhere, he exercised a beneficial influence. He was easy to approach and his relations with people were friendly. He was admirably served by an astonishing memory for men and things in general as well as by the quick and penetrating power of observation of his naturally inquisitive temperament.

Although he was already sixty-seven years of age, Father Soullier engaged in an intense activity at the head of the Institute. During his short term of five years as Superior General, his trips led him not only to visit the houses of the Oblates of Europe, but also to visit again Canada and the United States (1894) and Rome. He published the third edition of the Rules in 1894. He gave new impetus to ongoing works: novitiates were opened in Soto in Spain (1894), at Angers in France (1895) and at Bestin in Belgium (1896); a first house was established in Australia (1894) and, after shrewdly conducted negotiations with the imperial government of Germany, an Oblate province was founded in Germany (1895); finally, in 1896, he proceeded to establish the Oblates in Lower Cimbebasia (Namibia) in a missionary territory accepted already in 1892.

In two long and admirable circular letters to the entire Congregation, Father Soullier set forth the general guidelines he had set his heart on. The first (February 17, 1895, 51 pages) was devoted to Oblate preaching; the second (December 8, 1896, 128 pages) sought to promote study among the Oblates, not only during their first formation, but also once they were involved in the ministry. These two important circulars were reedited.

Father Soullier was a man of action, guided more by reason than by sentiment and always steadfastly devoted to the Church. In his interior life, he harboured a simple but very profound prayer life. He ruled with a gentle, but firm hand. He knew how to soften hard realities with tact, kindness, sterling diplomacy and always with supernatural motives. Moreover, his decisions were fully matured. In his person, one found a rare combination of flexibility and energy, activity and serenity. Under his leadership, the Congregation grew from 1211 members to 1427 members.