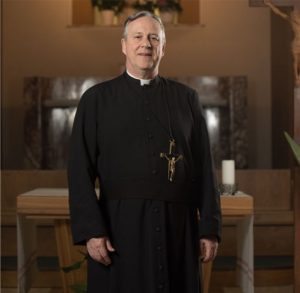 Born in Buffalo, New York, USA in 1952, he met the Oblates as a student at Bishop Neumann High School in Buffalo, and entered the juniorate in Newburgh, New York, in 1970. He made his first profession at the novitiate in Godfrey, Illinois, in 1973 and continued his first formation at Oblate College in Washington, D.C., obtaining a Baccalaureate in Philosophy and a Master’s in Theology.

He made perpetual vows in Newburgh in 1976. Following his ordination to the diaconate in 1978, he ministered for 6 months in Brazil. After his ordination to the priesthood in Washington in 1979, he returned to Brazil where, in the former São Paulo Province, he worked in parish and formation ministry, serving successively as pastor of several parishes, pre-novitiate director and novice master. As part of his ongoing formation as formator, Fr. Lougen participated in a 5-year school for formators program. He was elected to the Provincial Council of the São Paolo Province for three terms, serving in that capacity from 1985 to 1994. Upon returning to the United States in 1996, he served as assistant director of the pre-novitiate and pastor of Holy Angels Parish in Buffalo.

He became novice master in Godfrey, Illinois, in 2002 and was named provincial in 2005.

On September, 28, 2010 the 35th General Chapter in Rome elected Fr. Louis as the 13th Superior General of the Congregation.