A mission with “open doors” – Turkmenistan 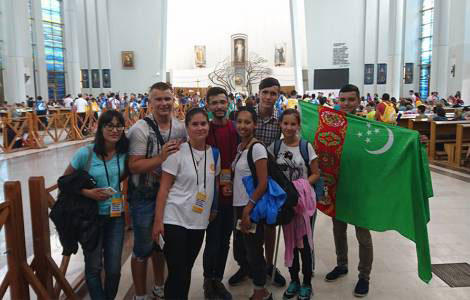 Ashgabat (Agenzia Fides) – “We announce Jesus Christ with our closeness and our ministry, especially that of preaching. People welcome the Gospel with passion and the message that God is love. There are not any other religious congregations yet, not even priests: for the time being we three priests and missionaries are the only presence of the Catholic Church in Turkmenistan. But in this country, where 82% of the surface is occupied by the Karakum Desert, we learned that even a single drop of water is like a golden nugget”. This is what Fr. Andrzej MADEJ said to Agenzia Fides. He is a Polish priest of the Oblates of Mary Immaculate and Superior of the “missio sui iuris” of Turkmenistan, where he lives with his two confreres, Fr. Rafal CHILIMONIUK and Fr. Pawel SZLACHETA. 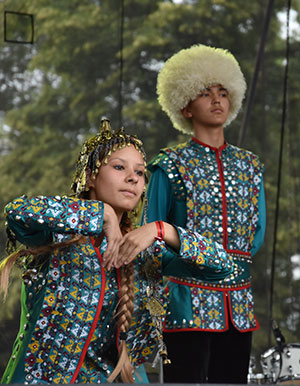 Youth from Turkmenistan performing during the Oblate World Youth Encounter in Poland, 2016.

Today, explains Fr. Andrzej, “the Catholic community of Turkmenistan gathers in the Chapel of the Lord’s Transfiguration, in the capital Ashgabat, and has about two hundred faithful”. Prayer, Eucharist, charity are the three pillars on which the mission is based: “Every day we dedicate a few hours to prayer, to the celebration of the Eucharist and to visit families, not only of Catholic faith. Caritas is also slowly organizing itself as a sign of a Church that witnesses the love of God. Announcing Christ in Turkmenistan means leaving the door of our home open not only for matters of faith but also for so many human relationships that we are establishing”.

In the former Soviet republic of Central Asia, the Catholic Church was reborn in 1997, when John Paul II instituted the Missio sui iuris. Initially, Mass was celebrated in the diplomatic territory of the Apostolic Nunciature of Ashgabat and they met in private homes. In 2010, the Turkmen government officially recognized the presence – hitherto only admitted in the form of Vatican diplomatic representation – but this measure only partially led to the hoped-for results: “So far, we have not built anything because we have no authorization. Slowly, however, roads are being opened: we would like to build a small church and the seat of the apostolic Nunciature. We continue to pray and hope to get the necessary permits”, the priest says.

Turkmenistan has over 5 million inhabitants; 90% are Muslims. The small Catholic community, according to Fr. Madej, is mainly made up of people of German and Polish origin and relate daily with Christians of other confessions and Muslim families: “They gladly welcome our visit. We often meet with members of the evangelical Church for moments of prayer and hymns of praise. In addition, we also participate with pleasure in Islamic feasts we are invited to”, the missionary emphasizes. The desire, he concludes, “is to build fertile and peaceful relations with everyone, even to eliminate the prejudice that Christians or Westerners are only interested in war or want to impose their civilization”. (LF-PA) (Agenzia Fides, 8/11/2017)