On December 11, 2018, the Oblates in Mexico paid homage to the great missionary Fr. Francis Theodore PFEIFER, leaving his memory in a bust that was unveiled in the atrium of the parish of San Pedro Mártir Quiechapa, Oaxaca, Mexico.

Bishop Miguel Pfeifer OMI, presided at the Mass in honor of the Our Lady of Guadalupe where he gave an account of the missionary life of his brother. After the procession, there was a simple homage from the community to Fr. Francis. Present were some Oblates and his sister Judith, as well as hundreds of parishioners and friends of the Oblates.  We were sure that he was smiling from heaven for this beautiful gesture of affection of ours, as we paid tribute to him as “father, friend and brother”. 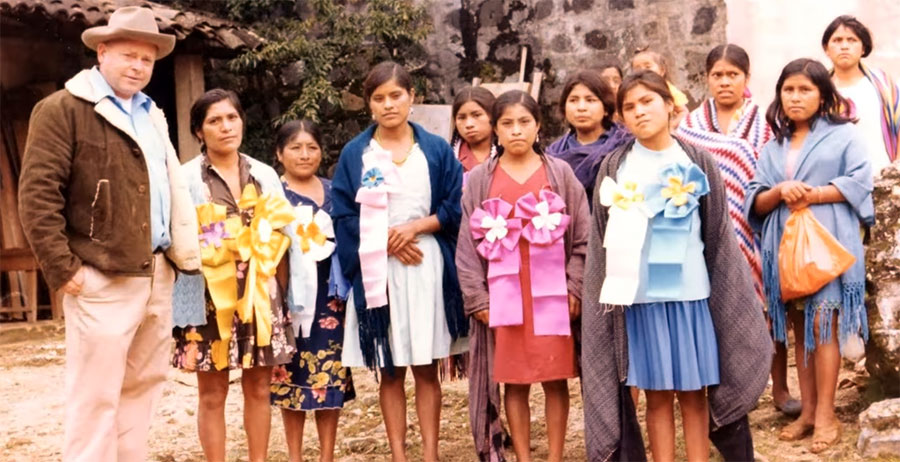 Born in the Rio Grande Valley, Alamo, Texas, Father Francis arrived in Mexico in 1963 to begin his missionary life in Mexico. He served in the parish of San Pedro Huamelula, La Magdalena Tequisistlán and San Pedro Mártir Quiechapa in the diocese of Tehuantepec, Oaxaca.

Known by the indigenous population of Quiechapa as “El Padre Chico”, he experienced firsthand what Pope Pius XI said of the Oblates in 1938: “They are specialists in difficult missions.”
Francis, as a missionary was more than a priest: he attended childbirths, built a clinic and provided medical service to the mountain communities in Quiechapa; he traveled to many villages to bring the sacraments to the people, helping them in every way he could. He was a mechanic, a carpenter and above all a great father to the people.

But he also defended the indigenous people against the drug cartel during his stay; he even became the target of an attack on March 8, 1987, when 12 bullets penetrated his truck on the way to Oaxaca, escaping unharmed from this attack. That dangerous moment made this simple, humble missionary even more determined, leading him to a profound decision: That of being the good shepherd!  “The coward flees when he sees the wolf coming, but the good shepherd stays, defends his flock” (Jn 10:11). Padre Chico decided to remain with his flock.  After many years of presence in the parish of San Pedro Mártir Quiechapa and later more than ten years in the parish of Cristo Salvador y Señor in Mexico City, he was already a little tired and sick, returning to Texas where he received the Lord’s call in April 2018.