“We must persevere and make justice triumphant.”

In the local African tradition and, in this case, in Guinea Bissau, there are many positive elements that should not only be welcomed, but supported and encouraged, as the Church teaches us. Likewise, there are beliefs, traditions, and behaviors that we cannot accept, because they are contrary not only to our Christian doctrine, but also to the fundamental rights of the person. One of these is forced marriage.

It often happens in some families that the marriage of daughters is decided on by their parents, especially their father or uncle. Mothers and the rest of the family generally agree with these decisions. The daughter may marry while still fifteen years old, or even younger, and often without knowing the future groom, who may be a much older man than she is, and many times already married. There is polygamy here. The father, or the uncle, in case the father died, makes arrangements with the future son-in-law, receiving substantial gifts from him. The date is set, and when the day comes, the daughter must go, whether she wants to or not.

There are many such episodes that I had to deal with, but I now share with you the first among them. It happened many years ago, but in the end, you will realize why I share it now: 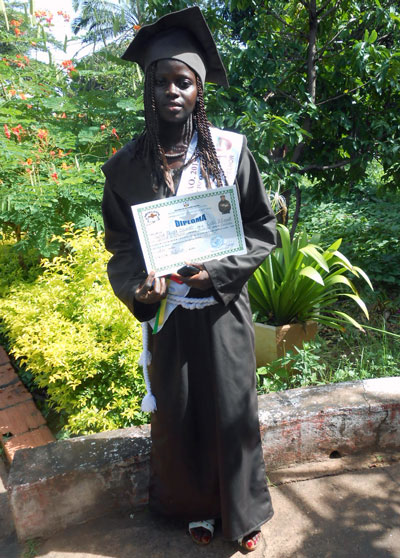 Lucia with her degree certificate

It was the years 2010-2011. I lived in the N’Dame Spirituality Center, about ten kilometers from the center of Bissau, the capital of the country. Not far from the center there is a village called N’Dame. The PIME Fathers (Pontifical Institute for Foreign Missions), who had been in the Centre before us (they were the founders) had built a school and helped the village in various ways, such as the distribution of water (coming from a well in the Centre) and assistance in sanitary care, aid that continued even after their departure. The Centre is run by a community of Sisters. I took care of the spiritual aspect.

One day, the Sisters told me that a girl from the village, called Lucia, had gone to them crying because her father had told her that she should marry a man she did not even know, and with whom her father had already made arrangements. They had arranged the marriage for June (it was the month of April). The girl was just over 15 years old and the man she had to marry was much older and had other wives. I went to talk to her father, whom I knew well. His name was Lona. He told me that it had been decided and that he couldn’t change his mind. He told the Sisters, who tried to convince him otherwise, that he could not lose his honour by breaking his promise. Very strange concept of honour!

I began to think. I told myself that it was not possible to let it go with the excuse that we had already done our part. It was a very critical time for Guinea (political vendettas, arbitrary imprisonments…) so it was difficult to trust the civil authorities. I asked Father Michael, a Franciscan who had always dealt with difficult cases, especially prisoners, if he could advise me. He gave me the telephone number of a certain Luis, who was the head of the Human Rights Commission in Guinea. I called Luis and he told me that a certain lady, a Judge of children’s rights, could help me. Her name was Filomena and she had her office in the Ministry of Justice. I immediately went to the Ministry. “Cuidado dos minores” (Protection of minors) were the words written on her office door. Filomena was not there at that time, nor in following days, but, after many efforts, I did finally meet her.

Filomena listened attentively to Lucia’s story. At the end, she said to me “That is why we are here. There are laws in Guinea, and we are here to enforce them. The fact is that many people don’t know this, and even if they did, they are afraid of the serious retaliation that could come from their families or the people in the village”. In Lucia’s case, she told me that, in order to resolve this, I would have to come back, but this time with Lucia and with her identity document. A  school document would have been enough, as long as her age was correctly mentioned.

When I returned to N’Dame, I sent for Lucia, and I told her, without so many words: “Would you be willing to come with me to the court and tell your story to Judge Filomena?” “Sim, N’misti” (yes, I want to), she immediately answered me. Being a little more than 15 years of age, she already showed great courage.

When I took Lucia to Judge Filomena, she listened to the story carefully, asking specific questions. It was also confirmed that she was 15 and a half years old. Filomena, like a mother, understood the tragedy to which so many girls like Lucia had to undergo. She promised Lucia that she would help her out of this nightmare, but in order to obey what the Law required, she would have to return with her father, who would be then asked to sign a declaration in which he would let his daughter free to complete her studies, and to marry whenever and whomever she wanted. At this point Lucia answered:

“My dad will never accept. If he knew I was here, he’d kill me.”
“Don’t worry, we have our own methods. Your dad will never know you were here. Leave it to us.” The Judge gave me an appointment for another day, so we went back to N’Dame.

The following week I went back to court. Filomena had already prepared the letter of appearance for Lona and her daughter Lucia. She asked one of her assistants to come with me. As we were approaching the village, the lady who came with me said it was better that she got off and walked on foot, so as not to arouse suspicion. Lucia had been already instructed by Filomena: when the lady with the message arrived, she had to pretend nothing had happened, and treat her like a stranger.

The lady arrived at the village, asked for Lona, and gave him the letter from the court. The letter did not contain the reason, so Lona thought it was a good thing and told Lucia that they should go to court. This, cleverly, showed a certain surprise, and everything went smoothly.

I was not in the village when Lucia went to court with her father. I returned to N’Dame a week later. Lucia first, and then Filomena, informed me: When the two of them appeared at the court, Filomena asked the usual questions:

“Is this your daughter?”
“Yes.”
“What’s her age?”
“18.”
“Strange, here it says 15! Is it true that you want to give her in marriage to someone?”
“Yes.”
“Do you know it’s against the law?”
“No, I don’t know.”
“Now you know. You can’t force an underage daughter to get married. Do you know that you can be jailed?”
“No; but how do you know all these things?”
“We know everything, we have antennas everywhere!”
Lona then started to get scared. The idea of going to jail scared him.
“What should I do?”
“If you don’t want to end up in jail, you have to sign a letter stating that you will let your daughter go to school and then get married whenever she wants and to whomever she wants.”

Lona would not have wanted to sign that statement, but fear of going to prison persuaded him to do it. Filomena added: “If by chance you change your mind, a phone call from Lucia will be enough to send the police and put you in jail.”

The years passed. Lucia, after finishing school, attended the university and became a nurse. At the same time, she married Domingos, with whom she now has a little girl, Miriam. Grandfather Lona didn’t want to know either about Lucia or Domingos at the beginning, but with time he reconciled with both of them. 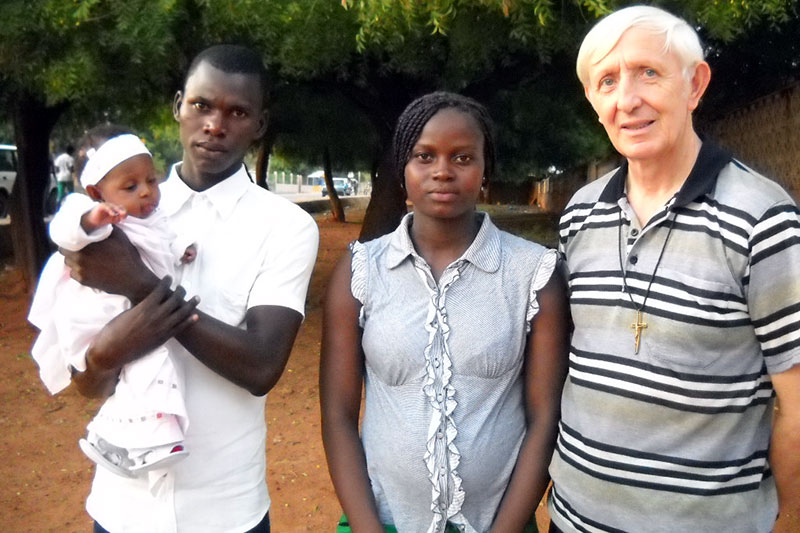 Filomena later helped us solve other cases similar to this one. I personally believe that we must not be afraid to commit ourselves to make justice triumphant, especially towards the weakest, even if this requires time, effort and perseverance.

Fr. Louis STUDER for a second term
Provincial Council of the Colombo Province of Sri Lanka