Oblates and Congregation for the Evangelization of Peoples

(Originally Published on the Mission-Unity-Dialogue Website and omiusa.org. Thanks to Fr. Harry Winter, OMI and Will Shaw for their cooperation.)

The Missionary Oblates of Mary Immaculate continue to play a significant role in many of the most difficult missions around the world.  We are well known and highly regarded in the Church for our availability.  Although, with good humor, we like to joke that we are specialists in making missions difficult, the simple truth is that Oblates are laboring with great zeal in many of the most challenging areas of the globe.  The Church counts on us, as Pope Francis insisted in his address to us on October 7, 2016. 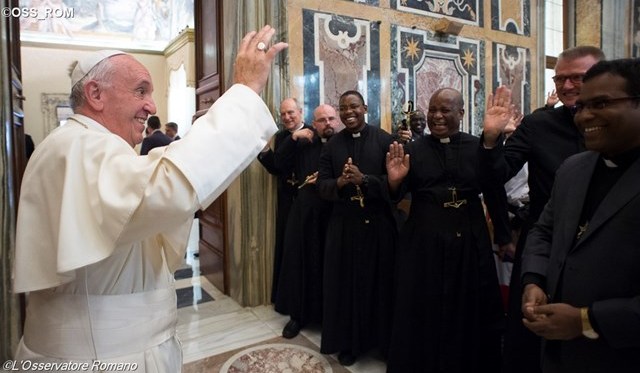 Pope Francis met the participants of the 36th OMI General Chapter, on October 7, 2016

Together with our reputation for working with the poor and most abandoned, the fact that we are called to collaborate closely with the Congregation for the Evangelization of Peoples (C.E.P.) is a great sign of our recognition as a missionary Congregation in the Church.  This Congregation, formerly called Propaganda Fide, was established by Pope Gregory XV in 1622 and has as its goal “…to direct and coordinate throughout the world the actual work of spreading the Gospel as well as missionary cooperation…” 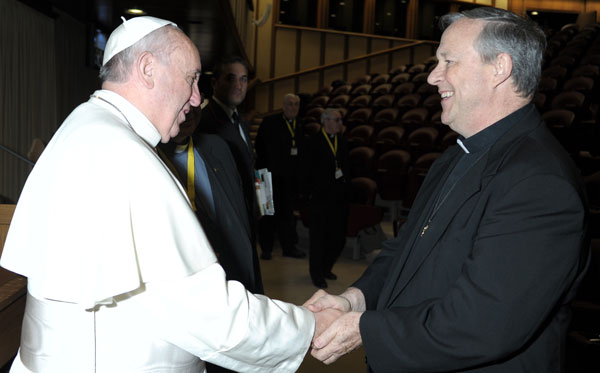 Pope Francis met Fr. Superior General after appointing him to the Congregation for the Evangelization of Peoples

Presently the C.E.P. is made up of 35 Cardinals, 5 Archbishops, 2 Bishops, 4 Directors of National  Pontifical Mission Societies and 3 Superiors General.   These Superiors General are Jesuit Fr. Arturo Sosa; O.F.M. Minister General, Fr. Michael Perry; and Missionary Oblate of Mary Immaculate, Fr. Louis Lougen.  Some of the responsibilities are: participating in the Plenary Assemblies of the C.E.P., and availability to the Cardinal Prefect and the Secretary of the Congregation on affairs related to the mission of evangelization and the growth and structure of the Church in those areas under the responsibility of the C.E.P. in which the O.M.I.’s are serving. 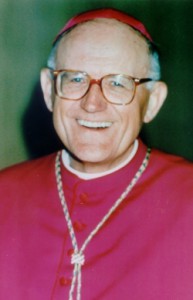 Besides the fact that the Superior General of the Oblates is a member of the C.E.P., we have also been called upon to make personnel available for significant positions of responsibility in the C.E.P.  The memory of our former Superior General, Archbishop Marcelo Zago, who was named Secretary of the C.E.P. by Pope St. John Paul II, continues to be held in high esteem in the C.E.P. and the Church at large for his contributions to evangelization and mission, especially in the area of inter-religious dialogue.

Fr. Ryzsard Szmydki, O.M.I., who has served both as the OMI Assistant General for Mission and Provincial of Poland, is presently the Under Secretary for the C.E.P., the fourth person in the organizational structure of the Congregation for the Evangelization of Peoples.  Fr. Tadeusz Nowak, O.M.I., former Provincial of Assumption Province, Canada, is currently the General Secretary of the Pontifical Society of the Propagation of the Faith.  At the Pontifical Urbaniana University, under the authority of the C.E.P., another Oblate, Fr. Alphonse P. Rakotondravelo, O.M.I., former Superior of the Oblate Scholasticate in Madagascar, serves as librarian for the Pontifical Mission Library.

Most frequently, Oblates involved in their local mission around the world are not aware of the high esteem the Congregation enjoys in the Church.  We do not like to blow our own horns.  But once in a while, it is good to recognize and thank God for what the O.M.I.’s do for the Church all over the world.   The spirit of availability, grounded in our vow of obedience, and the heritage of St. Eugene de Mazenod, that nothing be left undared to extend the Savior’s Kingdom, continue to make Missionary Oblates of Mary Immaculate ready to go to the most challenging missions.  Whether laboring on the peripheries of the world or in the Congregation for the Evangelization of Peoples in Rome, Oblates are serving with excellence.  The Church counts on us!

Latin America on the Road to Synodality
Tears of Joy