A humble missionary of Jesus Christ

This was the title that Father Nicolas Laverlochère gave himself. Nevertheless, the Oblate was a true giant of the apostolate while ministering to the Algonquians of James Bay. He was gifted with a strong build, a quick mind, a generous heart and uncommon energy, and it can be said that he was in reality the “founder” of the Oblate missions in that region. As early as 1845 he visited Abitibi Lake and Albany on the west bank of the Bay. The Amerindians soon called him “Mino-Tagossite”, one whom we like to hear. In spite of the painful paralysis that struck him at the age of thirty-nine, he still fulfilled a long and beautiful career in Timiskaming, where he died in 1884, at the age of seventy-three. In these brief stories, we can admire his great charity and the unremitting faith that saved his life on many occasions.

He crossed the “great water”
One day, as he was explaining to the Amerindians of Fort Albany the long voyage he had to undertake in order to come to them, they asked him: “Then you crossed the great water?” “Yes, my children I came across for you, so that I could teach you to pray to the Great Spirit. These were my thoughts when I left my country, and as I was kissing my mother… and my mother was crying.” “What, you have a mother? She is still living? And she was crying when you left? Then, you don’t love her?” “Oh my children, I love her more than I love myself, but I have a still greater love for your souls, because of the Great Spirit.” And he added: “I will never see my mother again on this earth, but I’ll see her in heaven, and it is to lead you there also that I have come among you.”

He converted a sorcerer
On another day he met a sorcerer who was suffering from a terrible leprosy that was eating away at his whole body. This old man of eighty would not give up his sorcery.

“Mino-Tagossite” sat at his bedside. He was tending all kinds of care and attention. This went on all night, in spite of the offensive odor emitted from the dying man’s festering wounds. The priest had to leave the cabin three times for fresh air. Then the moribund began confessing his sins out loud, mentioning offences and evil acts that everyone knew already. Finally, grace triumphed. In an act of sincere Faith, with a trembling voice, he asked for Baptism. What a joy for the Oblate! At the end of this long struggle with the devil, he was able to say, in the presence of the whole family, while pouring water on the ravaged forehead of the dying man: “Joseph, I baptize you in the name of the Father, and of the Son, and of the Holy Spirit.” 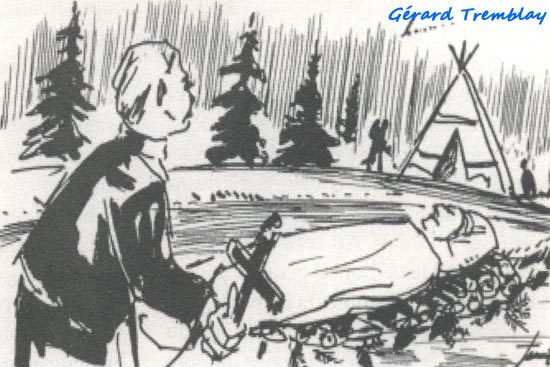 He dedicated his life to the salvation of souls
When the saving of a soul was involved, Father Laverlochère never hesitated to face several dangers. Fortunately for him, Divine Providence was stronger that the natural elements or the malice of men. One day as he was descending a turbulent river in a small bark canoe, accompanied by Father Hercule Clément and an Amerindian, the strong current began pointing them towards sure disaster. Facing the danger of being swallowed by the threatening waters, Father began to sing the “Ave Maris Stella.” At that very moment a tree fell over the river, and the light craft stopped against it, thus sparing the lives of the passengers.

At another time, the missionary insisted strongly that an Algonquian allow him to baptize his baby who was on the verge of death. Impatient and furious, the man shouldered his gun and aimed at the black robe. He was about to shoot. At that moment, the priest took hold of his crucifix and openly held it towards his adversary. “Stop”, he cried in a loud voice. Immediately the gun was lowered toward the ground. The shot rang out… but the bullet scraped the dirt at the feet of the one who had been its target. Once more the missionary was saved. Result: an infant was baptized and a hardened sinner was brought to repentance.

This was the apostle of whom Bishop de Mazenod could write to Father Etienne Semeria: “God is visibly on the side of our Father Laverlochère. While living among these people, although he is personally devoured by lice and mosquitoes, he instructs them and makes fervent Christians of them. He is devoted to a service that is beyond human forces.”

Roland Sainte-Croix, promoter
One of a kind