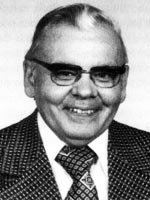 During the sixty years of l’Apostolat several Oblate Brothers devoted themselves to the circulation of this review in the households of Québec. We can name Jean-Guy Côté, Maurice-Yves Leblanc, Gilles Lemire, Bernard Durand, and many others. Without diminishing in any way the merits of these hardy apostles, today I would like to present the principal among them, Brother Roland Sainte-Croix.

He was born at Cap-des Rosiers, at the confines of the Gaspé Peninsula, the son of Martial Sainte-Croix and Agnès Bernier. He entered the Novitiate at Richelieu in 1936. In that same year he was the victim of an unfortunate accident. While erecting a handball (tennis?) court, the structure collapsed and he remained wedged in the midst of the entangled beams. The Brother managed to free himself, but at the expense of a fractured foot. In spite of surgical intervention, Roland would have to walk with a limp for the rest of his life. Nevertheless, this painful inconvenience did not prevent him from covering hundreds of kilometers to augment the number of subscribers to l’Apostolat.

After a brief stay in Montreal, at Saint- Pierre-Apôtre parish, Brother Sainte-Croix was named promoter of the still developing Oblate review, which had been started in 1929 by Father Henri Roy, O.M.I. At that time it had a mere 9,000 subscribers. Roland took the time to analyze the situation seriously. Then, commending his work to Notre-Dame du Cap, he hit the road. Wearing his cassock, as was customary at the time, with a valise in each hand, he set out on foot, by bus or by train to visit dozens of parishes, mostly in the country. He proceeded methodically. First, he would obtain the pastor’s permission; then he would go from door to door to solicit subions. He had a true gift for convincing people. The review cost only one dollar for twelve issues. It is a very interesting missionary magazine which provides good reading for the whole family. Once he had finished the rounds of the parish, he would select devoted and responsible women who would visit about ten subscribers the following year, to collect renewals.

Gradually, he formed a network of enthusiastic women workers who supported him generously for all the twenty-six years of his mission. In 1944 he launched the Semeuse de Joie (Sower of Joy), a small bi-monthly review destined especially for his “missionary moms”. Each issue brought a word of encouragement, examples of success, a “not serious” page, etc. The results were rapidly forthcoming. After twenty years he could count four thousand zealous ladies and the magazine had 83,000 readers.

One year, Brother Sainte-Croix , for some reason, could not meet the pastor of a small village. Nevertheless, he toured the parish. The following year, wishing to make up for the omission, he made a visit to the pastor. The good priest, who had been made aware of the previous year’s visits throughout his parish, mistakenly thought that it was a “frère de Sainte-Croix” (Brother of the Holy Cross Congregation). Touchy. as he could be at times, the pastor was somewhat rigid in his greeting. “Last year, a Sainte-Croix brother came to make the rounds of my parish without my permission. If I see him again, believe me, I’ll send him away.” But Brother replied calmly: “You’re right, Father. But as you can see I’m an Oblate brother, Brother Roland. I thank you for your friendly authorization.” Laughing surreptitiously, he left to visit his subscribers.

On another occasion, Brother Sainte-Croix asked a lady to become one of his volunteers for l’Apostolat. The lady responded: “I regret, that I can’t accept, my legs are too painful.” Brother replied with conviction: “Madam, if you accept this missionary work your legs will stop bothering you. I guarantee it.” As a matter of fact, this lady became a worker for several years without ever feeling pain in her legs. About twenty years later, she wrote to the review telling them that since she had reached the age of sixty-five, she was retiring and could no longer work for l’Apostolat. However, two years later she wrote in again, to say, this time: “Permit me to come back as a worker, my leg pains have returned.”

Saved by a Wolf
A humble missionary of Jesus Christ