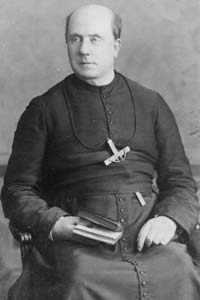 François Anger was born at Vannes on September 24, 1838, the eighth child of a family of twelve children. After his secondary studies at the minor seminary of Saint Anne d’Auray where he attended a lecture given by Father AmbroiseVincens about the Oblates of Mary Immaculate, he entered the novitiate at Nancy on September 26, 1858. Father Guinet, in his monthly notes about the novices, wrote that this was the case of “an excellent young man, intelligent and pious,” but with a frail health and who suffered especially from rheumatism. As a scholastic brother, he arrived at Montolivet on September 29, 1859. Initially, Father Mouchette, moderator of the scholastic brothers, found him to be “shy to the point of embarrassment,” but, in the month of May of 1861, he wrote that he was “a good religious, brimming with good will, always ready to give of himself.” He made his oblation at Montolivet in the presence of Bishop de Mazenod on May 27, 1860, and was ordained to the priesthood by Bishop de Mazenod’s successor, Bishop Cruice, on June 29, 1862.
Father Anger’s first obedience was for Bordeaux as chaplain of the Holy Family Sisters and co-worker of Father Soullier. In 1868, he was summoned to Paris and appointed special secretary to Father Fabre, the Superior General, a function he carried out for ten years. From 1879 to his death, he was pro-director of the Holy Family of Bordeaux. In this capacity, he preached many retreats and this work took up all his time. However, he did accompany Father Fabre to visit the Oblate houses in England and Ireland in 1882 and the houses of the Sisters of the Holy Family in Spain in 1883. He travelled to Rome in 1887 to attend the General Chapter and in 1895 accompanied Father Louis Soullier, the Superior General. He also took part in the General Chapters of 1898 in Paris and in 1904 at Liège.

Toward the end of his life, Father Anger was often subjected to fits of suffocation and choking. On February 1, 1906, he died on the train Paris-Bordeaux as they were approaching Aubrais station. His body was laid to rest in the cemetery of Montmartre in Paris.

In the handwritten obituary composed by a sister of the Holy Family, the sister characterized him as “one of the most dedicated confederates of our Holy Family. […] He displayed a paternal interest in all our works indiscriminately, giving of himself to each one according to their needs and to all with the same enthusiasm. It was especially at the time of the annual retreats that his genuinely apostolic zeal manifested itself in full force. Without hesitating to travel in the most intense heat, Reverend Father Pro-director went all over where the most important meetings seemed to demand his presence such as those of sisters preparing themselves for their perpetual vows. […] One could admire in Reverend Father Anger the religious exemplary for his regular observance of the rule, always at his post of duty for the smallest details as well as for the most important events. […] He was always available for the sisters who had recourse to him either personally or through epistolary exchange…”