Jean-Baptiste Guinet was born at Chimilin in the county of Pont-de-Beauvoisin in the diocese of Grenoble on December 21, 1832. he was the youngest child in a numerous family which numbered among its members two nuns and two priests. For a long time, his father opposed his vocation. He took the habit at Notre-Dame de Sion on September 7, 1857. It was there he pronounced his first vows on September 8, 1858. He did, however, make his novitiate at Nancy. In the notes concerning him, Father Berne, the novice master at the time, saw nothing but qualities and virtues in this brother. Already in the fall of 1857 he wrote: “Guinet has a prayer life, serious during religious exercises, wins everyone over by his astute services… Entirely sound in judgment, observant with a wisdom and acuteness that is rare. Already well grounded in the religious virtues, seeking God without worrying about what other people think, alert to overcoming himself and at foreseeing what could harm fraternal charity, enters fully into the spirit of his state of life which he loves deeply. He will be a valuable candidate.” In May, the novice master wrote once again: “His good conduct, his good spirit, his prayer life, his sincere desire to become a good religious, his diligence in his work have never fallen short of expectations. He is confirming more and more the hopes that we have placed in him.” 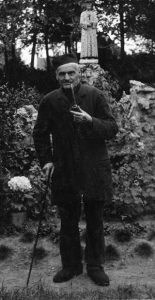 Without pronouncing his five year vows Brother Guinet took his perpetual vows on November 1, 1859 and remained on at Nancy in the role of procurator of the house, gardener and in charge of the linen. He was sent to Angers 1860 when this house was founded. In May of 1863 he went to Talence to attend the funeral of his brother, Father Francis Xavier, the provincial of Midi. The superior of that house, Father Leon Delpeuch, obtained from his superiors permission to keep Brother Guinet at Talence as sacristan of this important Oblate parish and shrine.

In 1867, upon the insistence of Father Toussaint Rambert, who was appointed superior of the scholasticate, Brother Guinet received his obedience for Autun. He then followed the scholastic brothers into various houses until the end of his days: in Autun from 1867 until the expulsions of 1880, in Inchicore from 1880 to 1884, in Belcamp Hall from 1884 to 1888, in Bleyerheide in Holland from 1888 to 1891, in Liège in Belgium from 1891 to 1903. In 1903, he received an obedience for the juniorate of Waregem where his uncle, Father Antonine Guinet was superior.

Everywhere he was assigned, Brother Guinet acted as assistant treasurer and especially as a competent gardener and a very assiduous worker. He was also a model religious. The author of his obituary wrote: “Brother Guinet was a man’s man. God had endowed him with a virile spirit, a receptive and practical intelligence, a sound judgment, sensitive good sense, a strong will, a devoted heart. To these natural gifts God had added the supernatural gifts that make the genuine religious: a great spirit of faith, a sincere humility, love of God, charity toward one’s fellow man, a dedication which made him ready to make sacrifices. The vows, the rules, the orders of his superiors, the signs of Divine Providence, in a word the manifestations of the will of God, always found him ready to obey […] He enjoyed the company of his confreres and he made a significant contribution toward maintaining that fraternal bond which makes up the congeniality of community life. Many were the brothers who were encouraged, enlightened and consoled by him. Love for the Congregation and zeal for souls were the inspiration of his interior apostolate; the same zeal inspired him in his relations with members of his family and other acquaintances. He was very knowledgeable in the ways of the spiritual life and he was fully capable of giving excellent advice to souls who were aspiring for perfection. He had a truly genuine prayer life; he loved prayer and religious exercises…”

During the 1870 war, with the other brothers at Autun, for a few months, he had been conscripted into the National Guard. It was there that he acquired a rheumatic condition from sleeping outdoors. Toward the end of his life, this rheumatic condition brought on a cancerous tumour in his right thigh. At of the beginning of the month of August 1907, he was compelled to take to his bed and he died on August 29 at 75 years of age.