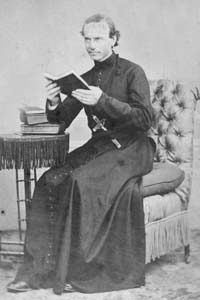 Charles Lerond was born at Peltre in the diocese of Metz on October 13, 1837. After completing his studies in philosophy, he began his novitiate in Nancy on October 31, 1859. In his notes, September 28, 1860, Father Lagier, the master of novices, wrote: “That is a most outstanding candidate both as to talent and virtue. Later on, he could become a very good professor, even a professor of theology.” In 1860-1862, he was a scholastic brother at Montolivet where he made his oblation on February 17, 1861 in the presence of Bishop Hippolyte Guibert who had come to visit the Founder who was ill. Father Mouchette, the moderator of scholastics, found this brother “very good, regular in his observance, very assiduous in his duties, but often perplexed and rarely satisfied. I believe,” he added, “that self-love plays a large part in this.”

In 1862-1863, he finished his theological studies at Autun where he was ordained to the priesthood on July 5, 1863. Before his ordination, Father Martinet, the superior, assessed this scholastic brother very favorably. He did, however, find that he was too much the detached observer, too reserved and a bit stubborn and independent. But, he adds: “Since his will is well under control, these faults become virtues. For example, his detached observing becomes wisdom, his reserve, prudence, his stubbornness firmness and consistency, independence becomes uprightness.”

After his ordination, he was sent to Rome to pursue his studies. He returned in 1865 with a doctorate in Canon Law. He then became a professor at the major seminary of Fréjus where he remained until 1877-1878, except for during the 1870-1871 war when we find him at Notre-Dame de l’Osier. From 1879 to 1887, he was professor at the major seminary of Ajaccio, then at the scholasticate in Liège until 1894. From 1894 to 1896, he was chaplain at the hospital of Saint Joseph of the Catholic University of Lyon where he won the hearts of everyone. He lived at Notre-Dame de la Garde as chaplain for the shrine from 1896 to 1899, then was superior at Vico from 1899 to 1905. Father Cassien Augier called him to Rome in 1905. In an October 14, 1906 letter to Father Lavillardière who had just been elected Superior General, Father Lerond asked to be dispensed from his vows to join the Cistercians in the abbey of Lérins. The General Council granted him this dispensation on October 17.

At Lérins, Father Lerond became Brother Marie Patrick. He began his novitiate on January 6, 1907, and made his perpetual profession on January 6, 1911. On August 21 of the same year, he was elected abbot. He died on a trip to Brazil on July 24, 1917.