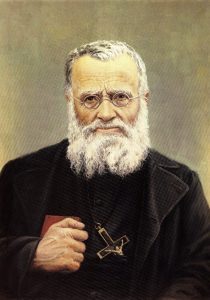 Father Joseph Gérard was born near Nancy, France, in the village of Bouxières-aux-Chénes on March l2, 1831. He spent his childhood on the family farm but, with the help of the parish priest, was able to commence studies for the priesthood.

While in the local seminary of Nancy for two years, he was impressed by accounts of missionary work, and, in 1851, he joined the Missionary Oblates of Mary Immaculate. He was ordained a deacon by the founder, Saint Eugene de Mazenod, who assigned Joseph Gérard, at the age of 22, to the mission of Natal in South Africa.

In May, 1853, Deacon Joseph Gérard set off for his mission field, never to see France again. On February l9, 1854, he was ordained priest in Pietermaritzburg, South Africa, and started his ministry to the Zulu People. Despite all his good efforts, his ministry among the Zulus did not seem to bear immediate fruit, and, with a sense of great disappointment, he moved, in 1862, to the kingdom of Lesotho to bring the Gospel to the Basotho People. Fr. Gérard worked and prayed for more than two years before he won his first Basotho catechumen. Even after that, progress was slow.

However, more and more people in these early years heard the message of Christ, and came to the church. Within five years of his coming there the first mission station was established at Roma. Today it is the site of many novitiates and of seminaries, a University founded by the Oblates, high schools, numerous religious houses, and a hospital – all the legacy of this remarkable man of God. 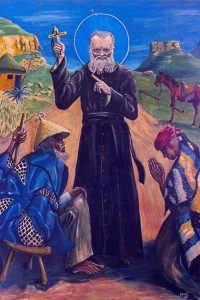 Throughout his years in Lesotho Fr. Gérard’s concern and care for the sick and the old was remarkable. Despite the distance, despite the weather, despite the inconvenience, he would set out, on foot or on horseback, carrying the Blessed Sacrament, to minister to those afflicted. His deep devotion to Mary was absorbed by his first converts, and since his day the nation has been dedicated to Mary Immaculate.

The last years of Fr. Gérard´s life were spent back at his first mission, Roma. Up to a month before his death he was on horseback, out on the mountain tracks caring for those in need. On May 29, 1914, Joseph Gérard died. He was 83.

In one of his retreat notes, Fr. Gérard gave the key to his constancy when he wrote about the people he served: “We must love them, love them in spite of everything, love them always”. He lived out his belief in the joy of spreading God’s Word, despite the hardships and opposition he encountered.

READ: the homily delivered by Pope John Paul II at the beatification of Fr. Joseph Gerard