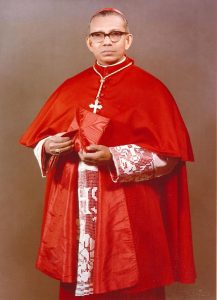 Cardinal Thomas Benjamin Cooray, was born on December 28, 1901, to a poor family in Negombo, Sri Lanka. In 1925, he entered the Missionary Oblates of Mary Immaculate. He was later sent to Rome for studies. At the Pontifical University of St. Thomas Aquinas he obtained a doctorate in philosophy. On June 23, 1929, he was ordained to the priesthood.

In 1931, he returned to Sri Lanka. From then until 1945 he was involved in pastoral and missionary work. He taught at St. Joseph’s College, and finally became rector of the Oblate seminary in Sri Lanka.

On September 2, 1976, he resigned as archbishop of Colombo. Cardinal Cooray died at age 86, on October 29, 1988. He is buried in the Basilica of Our Lady of Lanka in Colombo.

The “nihil obstat” from the Vatican for the Cause of his Beatification was granted in 2010.