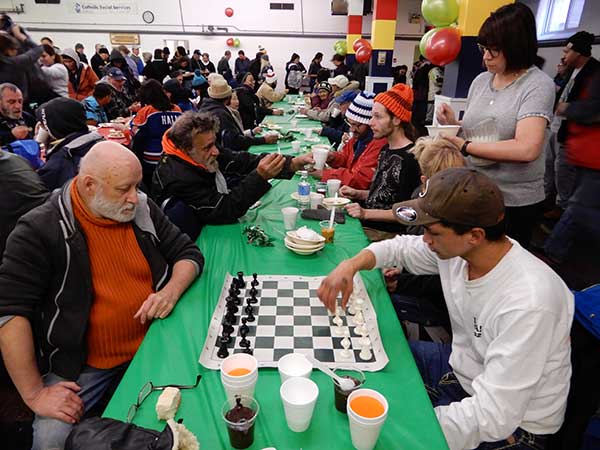 Last year (2017), His Holiness Pope Francis, in his Apostolic letter, Misericordia et Misera invited the Catholic faithful to celebrate the 33rd Sunday of ordinary time in commemoration of the World Day of the Poor. Seeing the contrast that exists between “empty words so frequently on the lips of many people who call themselves disciples and the concrete deeds against which we are called to measure ourselves,” Pope Francis invited the Catholic faithful with the words of the Apostle John; “Little children, let us not love in word or speech, but in deed and in truth” (Message of First WDP, #1).

Heeding this call, Sacred Heart Church of the First Peoples organized a meal on 17 November 2018, in commemoration of this year’s World Day of the Poor. In conjunction with Catholic Social Services of Edmonton, at least 600 people had a chance to have a warm and well-prepared meal. The meal took place in the Church Hall (Kateri Hall) from 11:30 am to 2pm. Archbishop Richard Smith was present and opened the day with a prayer of blessing and thanksgiving for this gathering. Also in attendance was Archbishop Emeritus Sylvain LAVOIE, Fr. Mark BLOM, the Sisters of Providence, and many parishioners who volunteered to help. We were also blessed to have volunteers from the nearby Marian Center.

Indeed, more than just a day to provide a meal for the poor in our neighborhood, this event was for many a time of encounter. Even before we began serving the meal, an atmosphere of sharing our stories and listening to each other was already evident. It was a joy to see barriers of fear and indifference being broken and the recognition that we are all brothers and sisters emerging. It was good to see the young, the youth and older people work together for the common good. It was as Pope Francis observes, “the rediscovery of our capacity for togetherness” (Message of second WDP, #6).

As we look forward to celebrating the feast of Christ the King, it is pertinent to let ourselves be taught by Christ what it means to create relationships with the poor with whom Christ so often identifies himself and loves, and encounter the world around us upon which are found divine imprints.

We thank the many volunteers who showed us the evangelical way of looking up to Christ in creating the culture of encounter and the promotion of Justice, peace, and integrity of creation in our community.