Rev. Fr. Carl Kabat, OMI, a tireless opponent of nuclear weapons, died on August 4 in San Antonio, Texas, at the age of 88. Much of his influence came from his unbending commitment to public protests, and a defiant spirit with a touch of sly wit. He sometimes broke into military bases dressed as a clown, an homage to Saint Paul’s admonition in Corinthians to be valiant yet humble: “We are fools for Christ.” He was repeatedly jailed — spending a total of nearly 20 years in jail since the 1970s — but remained steadfast in his belief in civil disobedience to bring attention to the threats from nuclear arsenals. Through difficult times, the Oblate charism — “to preach the gospel to the poor” — offered direction to this relentless anti-nuclear weapons protester on the road ahead. Here is an extract of the homily preached by Fr. Jim Allen, OMI at his funeral service. 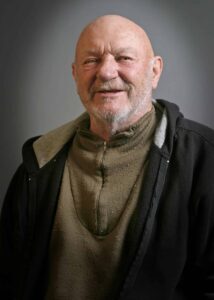 Often in obituaries, we see a funeral service described as a “celebration of life.” Indeed, that is what is happening here. But it is the celebration of the life of Jesus Christ as it was made manifest in the life of Carl Kabat. For that is exactly what the life of a Christian is meant to be: a manifestation of the continued presence of Jesus, the Risen One, in our world. Of course, I will speak of Carl, but in doing so, I want to show how, like each of us, Carl was an instrument of God in spreading the Kingdom of God in the world.

Right after a person is baptized, in the Catholic tradition, the priest or deacon signs the new Christian with the Holy Oil called Chrism, a word with the same root as “Christ”. These words accompany this anointing: As Christ was anointed Priest, Prophet, and King, so may you live always as a member of his body, sharing everlasting life.

I am sure that as good Catholics, Nick and Anna Kabat, took baby Carl to be baptized shortly after his birth in Scheller, IL. That’s what good Catholic parents do. And with that ritual, Jesus became the lead character in the drama that would be Carl Kabat’s life story. First anointed into what we call the Common Priesthood of all the Baptized, Carl would learn what it means to pray and to worship God. Years later, he would also respond to the call of Jesus to share in the ministerial priesthood, to bless, to preach, to forgive sins, to offer the Sacrifice of the Mass with and for God’s people as a member of the Missionary Oblates of Mary Immaculate.

At his baptism, Carl also entered the royal family of Christ the King, and over the years, he would learn through difficult life experiences how challenging it is to be a co-worker of Christ the King, helping to make the world aware that this is a Kingdom of Peace and Justice, not of war and bombs and self-interest. Sometimes, Carl knew that he was preaching Christ’s kingdom upon deaf ears. But he liked to call himself a “fool” for Christ. Just as Jesus put his life on the line to extend his kingdom, Carl did the same in his own way.

Priest, King and Prophet. That’s who we are all called to be as baptized into the life of Jesus.  But Prophet! Now there’s a role that Carl took really seriously. You see, prophets are not primarily folks who predict the future. Rather, if you look at the lives of the great prophets of the Bible and even of world history to this very day, they were men and women, especially called by God, who could read the signs of their times and challenge people to turn their lives around; otherwise the future would be very bleak for them. They didn’t need a crystal ball for that.

And prophets were not always easy to understand. Often, they were not easy to live with. Just last Sunday, we heard this reading at Mass, about Jeremiah the prophet:  Some people did not like what Jeremiah was saying And so they took Jeremiah and threw him into the cistern of Prince Malchiah, which was in the quarters of the guard, letting him down with ropes. There was no water in the cistern, only mud, and Jeremiah sank into the mud. (Jer 38:4-6, 8-10) Doesn’t that image fit Carl and his experiences in the prison system?

A few moments ago, we heard another prophet of God, Isaiah, speaking the very words that inspired Carl’s lifetime mission: They shall beat their swords into plowshares and their spears into pruning hooks; One nation shall not raise the sword against another, nor shall they train for war again.

“One nation shall not raise the sword against another…” Isaiah’s prophecy has not even come close to being fulfilled, although there is always reason to be hopeful. Every Roman Catholic Pope since the days of the first nuclear bomb in 1945, as well as the Second Vatican Council, have spoken strongly and decisively about the dangers and the absurdity of the arms race; in fact, Catholic teaching has developed to the point where Pope Francis said at Hiroshima, Japan, in 2019, what Carl was saying all along:

Our Church teaches us that the Holy Spirit whom Jesus sent to His followers gives charisms or gifts to help build up the Kingdom of God on this earth. And from the very beginning, the gift of prophecy was considered a special gift. Those to whom God has given this gift of prophecy have sometimes been reluctant like Jeremiah who cried out: “Ah, Lord GOD!” …“I do not know how to speak. I am too young!”. Some, such as Jonah, would try to run away and would end up in the belly of a fish. Not all of the prophets were pious sons and daughters of Israel. Not all more recent prophets were Roman Catholics or even Christians. Think of a few of the prophets of our own day. Mahatma Gandhi; Dorothy Day; Rosa Parks; Bishop Oscar Romero; Archbishop Desmond Tutu; Oblate Archbishop Denis Hurley; Fr. Larry Rosebaugh; Dr. Martin Luther King; Sister Helen Prejean; Sister Thea Bowman; Fr. Carl Kabat. You can add many more to the list, I am sure.

They did not all prophesy the same message. There is enough evil, enough destructive behavior, enough oppression of many varieties that we will never run out of a need for prophets with a variety of messages.

And what is that prophet’s reward? What is our prayer and hope for Carl Kabat today? Matthew’s gospel tells us that too: Then the king will say to those on his right, ‘Come, you who are blessed by my Father.  Inherit the kingdom prepared for you from the foundation of the world.  For I was hungry and you gave me food, I was thirsty and you gave me drink, a stranger and you welcomed me, naked and you clothed me, ill and you cared for me, in prison and you visited me.’  … ‘Amen, I say to you, whatever you did for one of these least brothers or sisters of mine, you did for me.’

May we all be so fortunate as to one day to hear those same words.