It was on January 27, 2019, that the Cathedral of Our Lady of Mount Carmel in Jolo, Capital of the Province of Sulu, was bombed during Mass, killing at least 26 people and injuring 116 other churchgoers. On its first anniversary, Christians in Sulu province prayed together for their safety amid incessant tensions, as well as for peace and harmony among believers of different faiths.

The Vicariate of Jolo has been entrusted to the Oblates of Mary Immaculate since 1939.  Three Oblates, including the Vicariate’s fourth Bishop, Benjamin DE JESUS, along with a number of lay people, have been killed in violent incidents in these southernmost provinces of the Philippines. 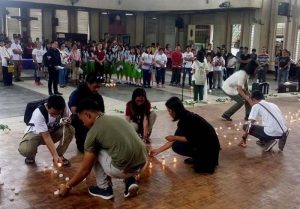 In this March 11, 2019 file photo, worshipers are shown lighting candles in the Jolo cathedral on the 40th day since the attack. (Handout photo via John Unson – Philstar)

Fr. Romeo SANIEL, Apostolic Administrator of the Vicariate of Jolo, issued a statement calling on Catholics in Sulu to continue praying for the full recovery from injuries and trauma of the surviving blast victims.

The island province of Jolo has often been under the threat of terrorist groups, especially the Abu Sayyaf that operates in the fashion of the Islamic State of Iraq and Syria.

Over the years, Fr. Saniel has earned respect, even among the Muslims, for being extensively involved in continuing interreligious dialogue and promoting Muslim-Christian solidarity. He initiated the Vicariate’s peace-building program, which focuses on workshops on countering violent extremism and on building respect and cooperation among religious sectors.

“One year is like yesterday for those who lost loved ones. No words we offer or deeds we perform can ever truly remove the pain of their absence. The victims still demand justice. Concerned Christians and Muslims cry out never again,” Fr. Saniel said in his statement. 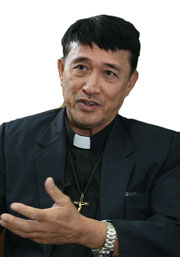 Here is the full text:

Greetings of peace and solidarity.

Last January 27, 2019, an ISIS inspired group bombed Mount Carmel Cathedral in Jolo. The twin explosions killed 26 and injured 116 Mass goers. This barbaric attack was condemned by Muslims and Christians all over the world. I was instructed by Pope Francis, “to care for all the victims. Make them feel that the Church will never abandon them. This tragedy should not destroy the harmonious relations between Muslims and Christians in the area.”

Today, January 27, 2020, we commemorate the 1st year anniversary of 1/27/19 (the Mount Carmel Cathedral bombing) with the theme, “Keeping their memories alive”. One year is like yesterday for those who lost loved ones. No words we offer or deeds we do can ever truly remove the pain of their absence. The victims still demand justice. Concerned Christians and Muslims cry out, “Never again”.

Mindful of the mandate of Pope Francis and the Catholic Bishops’ Conference of the Philippines, we accomplished the following:  First, we restored and inaugurated the newly renovated Mount Carmel Cathedral. We thank those who donated for the restoration of Mount Cathedral. Second, we assisted the victims in terms of cash assistance, hospitalization, initial trauma healing, scholarships, and housing. We thank all the benefactors. Third, we have strengthened our Interreligious dialogue program (IRD program) that promotes harmonious relationships and religious tolerance between Muslims and Christians through countering extremism seminars, activation of interfaith councils, and joint celebrations during Ramadan and Christmas.

The steadfast love and faithfulness of the victims has been our inspiration for the past year. Even as they mourned in pain, they summoned the strength to carry on, which reminds us that together as Christians and Muslims there is nothing we cannot overcome.

Please pray for the repose of the souls of those who perished, and perseverance and healing for those who were wounded. Let peace and greater human fraternity reign in our land.